Limerick charity gives a 'Heart to Hand' to help community 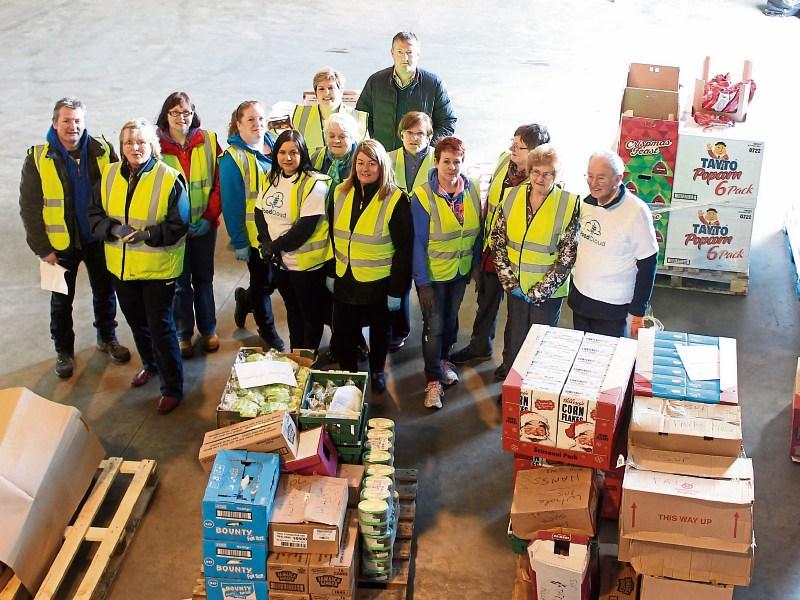 Some of the many volunteers with Heart to Hand Limerick, gathered in a warehouse in Raheen for a weekly collection Picture: Michael Cowhey

IN recent years, many food companies have moved away from binning food which has gone out of date, preferring to give it to those who can really use it best. Now, a Limerick charity is bridging the gap between companies, community groups and charities.

Heart to Hand in Limerick has linked up with 23 charities across the city and the county, as well as a number of companies nationwide to source food to benefit the needy.

Whether its produce which is on the brink of going out of date, or incorrectly dated items, Heart to Hand – co-ordinated in Limerick by Knockainey woman Geraldine O’Sullivan – ensures it goes to those who need it the most.

Once a week, part of the Munster Logistics warehouse in Raheen is turned into a ‘food distribution centre’, where companies can drop off unwanted goods.

Then a small army of volunteers will distribute the food to a number of the local charities linked in with Heart to Hand.

“I have 17 peoole who will come to me at an hour's notice [for a distribution],” Geraldine tells us. “They come from all areas of Limerick county, all races, all creeds. Nobody has dropped out yet – so we must be doing something okay!”

One of the roles of a volunteer with Heart to Hand is often to pick up items from locations across the Mid-West in a refrigerated van which was donated to the group by the JP McManus Benevolent Fund.

Despite this, Geraldine says many companies are happy to deliver.

“We are doing them a favour: it means they don’t have to recycle the food items. This would be a costly exercise to them,” she explains.

Heart to Hand Limerick has linked up with both Aldi and Tesco, while Bia Food initiative – which is linked with numerous other companies for food collections – also provides a weekly delivery of food to Limerick.

When the Limerick Leader visited the site, fresh yoghurts, crisps, lettuce, fruit, and pasta sauce were being delivered.

Although the volunteers split the deliveries equally between the Limerick charities, Geraldine knows some foods are not appropriate for every charity – she has sought out many of these groups herself.

”I do not call every charity every time. I know if there is a load of milk products, that everyone will take something. But if it is meat which has to be cooked, it is restricted to different groups, some of whom would not have cooking facilities,” she says.

For Sonya McClean, of the Southill After School club, which looks after 75 children a week, the food donation is a godsend.

“Our funding has been cut, so the contribution we are getting means we can do more things with the money we have. Without this, the kids would not get as much as they are getting now. There is equipment we can bring in now that we would not have been able to bring to the centre otherwise,” she tells us.

There is also a deeper strand to the support the club is receiving from Heart to Hand, with Sonya pointing out the food poverty she says exists in Southill, which is hidden from public view.

At the other side of the city, Kieran O’Neill, St Munchin’s Community Centre, picked up a delivery including yoghurt, popcorn, sausages and ham.

He says: “They would come to us every second week. We would then deliver around the houses in Kileely and Thomondgate to the elderly people, people who are in need. It is fantastic.”

Pat Whelan is one of the drivers for Heart to Hand. A project manager with an engineering firm by day, the Ballina man has been involved in Heart to Hand for 16 years.

“The people of Limerick are fascinating. They want to help, and they want to give to their community. That’s why we love working with these groups, and we will do whatever we can to bring whatever food is available around the country down here,” he said. “Nobody in Heart to Hand gets paid, everyone is a volunteer. They do it for the love of their own people, to ensure they are looked after.”

Among the volunteers, Camilla O’Brien, Ardpatrick, believes the service offered by Heart to Hand is “critical”.

“The amount of work done is so important. It provides money that can be used in so many different areas.”

Roisin McCann of Hospital added: “It is so easy to do, and is so important when you see the levels of food poverty around Limerick.”