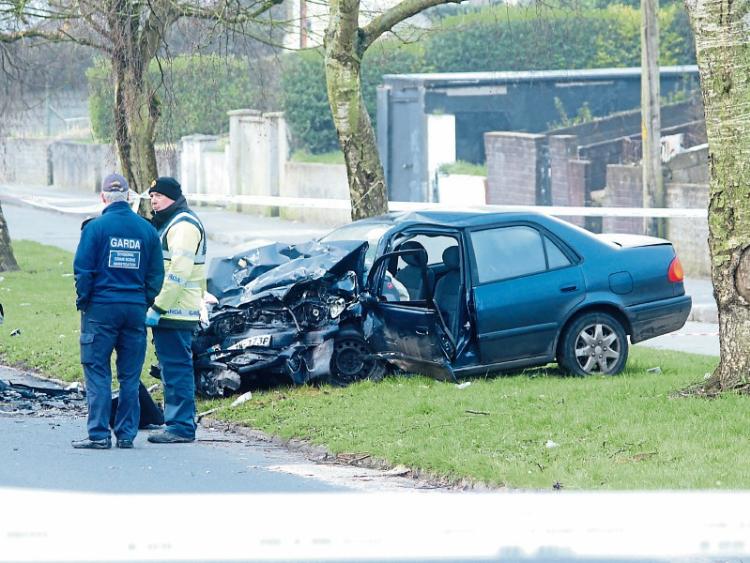 Tragedy: the scene on Hyde Road, Limerick after the car crash in which Michael Madigan lost his life

THE young Broadford man who died in a road traffic accident in the city last week was buried amid great sadness in his native parish at the weekend.

Michael Madigan was one of five brothers and the son of Ann and Seán and  died following a car collision on Hyde Road, Limerick on the evening of March 15. He was a passenger in a car driven by Andrew Mason Roche who was seriously injured in the crash and  died two days later.

Speaking at Mr Madigan’s funeral Mass in Broadford on Saturday, Fr Frank O’Dea told the congregation that a woman who came on the accident that Tuesday evening had contacted him. “She rang me to pass on to the family the assurance that Michael was not on his own when he died,” Fr O’Dea said. “It is a parent’s instinct to be with their child. This person in a sense became father, mother, brother and uncle.”

Among the gifts brought to the altar as symbols of Michael’s life were several family photographs, including one of Michael at his Confirmation ceremony and one of four of the  Madigan brothers as altar servers.

Michael was friendly and outgoing, Fr O’Dea said, but it was what he had chosen to do with his life that spoke most to who he was. Michael, he explained, had graduated with a degree in social care in 2013 and at the time of his death was studying to become an emergency medical technician and had volunteered with the Red Cross. He worked with the St Joseph’s Foundation, caring for and supporting people with disabilities and special needs.

“This is the beginning of Holy Week, when Our Lady stood by the cross while her own son was dying. The feelings of  Michael’s family mirror the feelings of Our Lady,” Fr O’Dea said. But Easter, the Catholic church’s great feast, was also about the triumph of life over death, of light over darkness. “We must be a source of hope,” he stressed. And he praised the community for the compassion and companionship they had shown the Madigan family in their grief.

Co-workers in St Joseph’s Foundation and staff from the Broadford Community Creche formed a guard of honour.

Michael, who was buried in Springfield Cemetery, is mourned by his parents, Ann and Seán, his brothers John, Gerard, James and Paul, aunts, uncles, cousins, neighbours and his many friends.