Long journey into sorrow begins for the Egan family 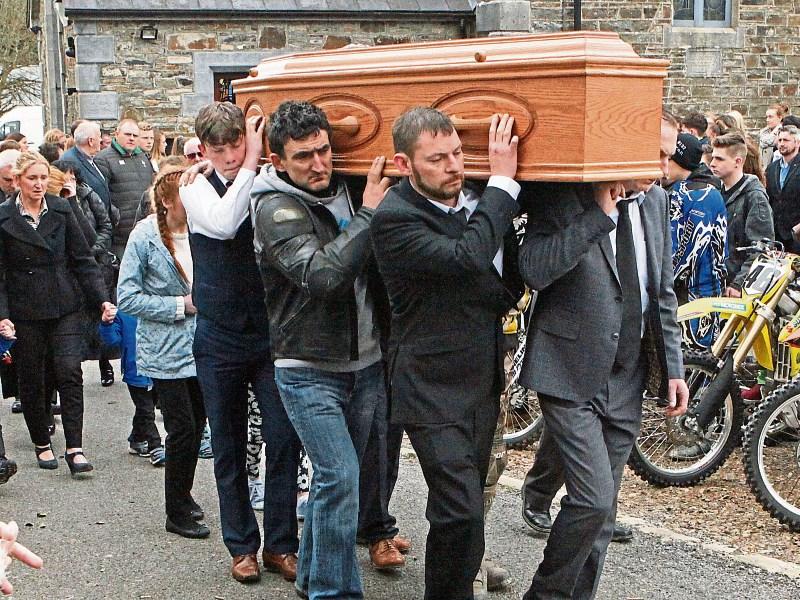 The hardest and saddest journey of all: Seán Egan is laid to rest in Templeglantine

ANOTHER car crash has claimed another young life in West Limerick this week and yet another family and another parish are left mourning their dead.

Last Saturday, just hours before 28-year-old Michael Madigan was laid to rest in Broadford, the Egan family in Templeglantine was getting the tragic news that their beloved Seán had died in an accident in Co Sligo.

Seán, a 17-year-old student, died when the van in which he was a passenger collided with a wall on the Pier Road, Enniscrone shortly before 2am on Saturday. He was buried in Templeglantine this Wednesday.

Seán is the son of Dave and Helen Egan of Gortnagloss, Templeglantine. He attended Templeglantine NS and Desmond College, Newcastle West before enrolling in LIT last autumn where he was studying mechanical engineering.

And many of his class  mates as well as his team mates in the Templeglantine GAA, fellow members of the Rathkeale Boxing Club and fellow cross country riders  joined the Egan family this Tuesday and Wednesday for Seán’s funeral rites.

“ Seán, at just 17 years of age, made a lasting impression on all those who came into contact with him during his years playing hurling as a strong reliable defender in the green and gold hoops of Templeglantine,” the GAA club wrote in tribute this Wednesday. Seán won a County U16 Championship with the club in 2014, and also featured in the 2014 West Minor Hurling Final. “He was a well mannered, cheerful, friendly and hugely popular member of the teams he played on and was always full of fun. His team-mates, mentors and close friends in the club will miss him very dearly and he will never be forgotten. Wherever the green and gold hoops are worn, Seán will be there with us in our thoughts.”

The Irish Amateur Boxing Association and the Rathkeale Boxing Club also went public in offering their condolences to the family. Seán won a national boxing title with the Rathkeale club bringing home the gold medal in his Boy 2 category, having already won the county and Munster titles.

This gold medal was among the gifts brought to the altar at Seán’s funeral Mass along with his cross-country motorbike helmet and hurley.

Fr Denis Mullane, in his homily, described Seán as someone full of goodness and thoughtfulness. “He packed so much into his almost 18 years,” he said. “He had a gifted pair of hands and a winning spirit.

“It is only natural at this time that we ask why,” Fr Mullane continued. “It is more appropriate to ask how. How can we be of help and help the family to cope with their loss.”

Addressing Seán’s family, he said: “Nobody but you knows how your lives have been turned upside down, how the gift of life that was Seán’s and that is in all of us, is so unpredictable.

“We are all disarmed by the sudden departure of Seán from our family and community. It is very challenging to our faith,” Fr Mullane continued. As people seek to understand God’s purpose, he said, “the only prayer we are left with is My God, My God, why have you forsaken me?

“This prayer unites us with family who suffered the tragedy in Buncrana and also with those who died tragically in Brussels,” Fr Mullane said.

Seán is mourned by his heartbroken family, parents Dave and Helen, sisters Roisín and Sinéad, brother Ciarán, grandparents Anne and Mikey Egan and Pat and Kathleen Fleming, aunts, uncles, grandaunts, granduncles and cousins and by his many friends.