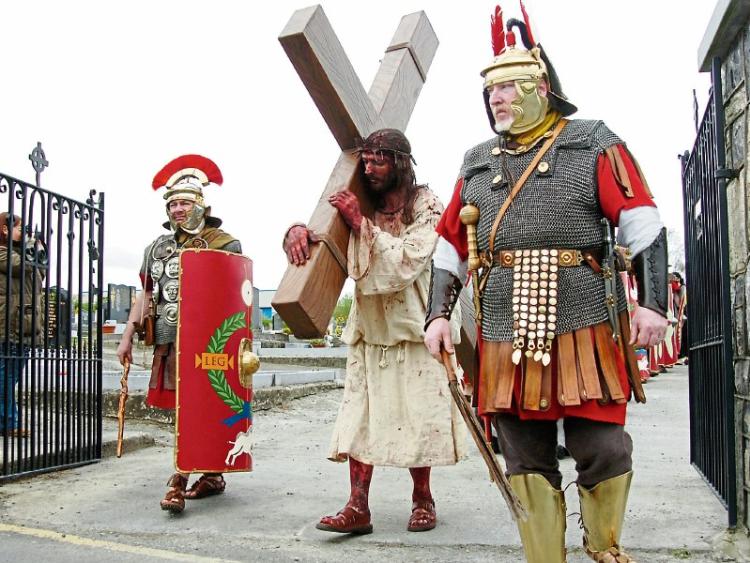 The scene at Calvary cemetery, Newcastle West when the Way of the Cross got under way last year

YEAR after year for more than a decade, the crowds have lined the streets of Newcastle West every Good Friday for the Way of the Cross, a solemn and respectful re-enactment of one of the pivotal events of Christianity.

And in the years since it began, the re-enactment has grown to become a deeply cherished event in the Easter calendar in the town and in the wider West Limerick area. This year again, art teacher Seán Shiels will lead a band of students and teachers from the Desmond College  to take up their places on the Way of the Cross 2016.

And this year, as in previous years, they will be joined by members of  Legion Ireland, a Roman re-enactment society from Cork and by Brian Smith who will play the role of Christ.

“We expect to have about 20 soldiers on the street alongside the main characters of Christ and his mother Mary, Mary Magdalene, Veronica and the Apostles,” Mr Shiels explained.

Students from transition year and fifth year are again involved, he said, and are crucial to the event, and to the stewarding of the event along with teachers from the school.

Each year, he added, the event sparks enthusiasm among the participants and he appealed to the residents of Newcastle West and to the people of West Limerick to turn out next Friday to support them and keep the tradition alive.

The Way of the Cross will begin, at Calvary Cemetery at 2.20pm on Good Friday and will make its way slowly, and with a number of stops, down Churchtown, Church Street, through the Square and along Bridge Street.

It will arrive at the parish church just before 3pm when there will be a raising of the cross ceremony.