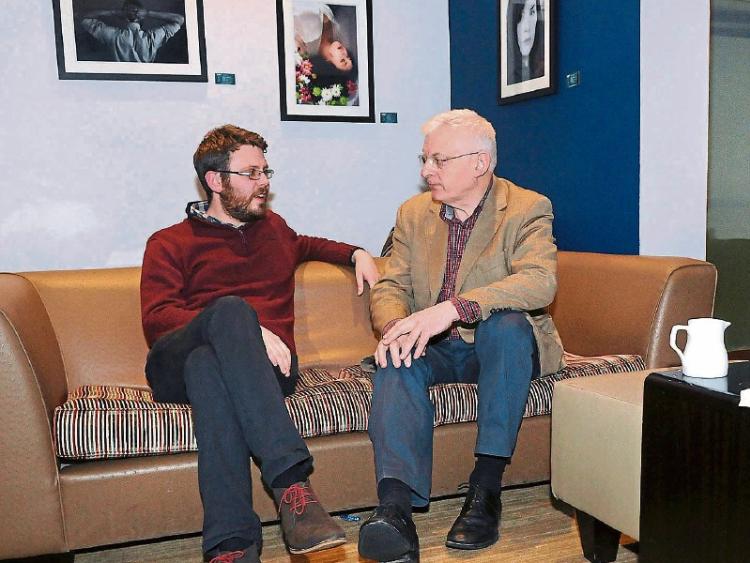 Cllr Cian Prendiville with Joe Higgins, who will play a leading role in his bid to secure election to Seanad Eireann on the Labour panel

LIMERICK City North councillor Cian Prendiville feels he has a “real shot” at being elected to Seanad Eireann.

The Anti-Austerity Alliance (AAA) member, who came within just over 200 votes of being elected to the Dail, has been nominated by four of his party colleagues to run for the Upper House.

Cllr Prendiville was in Dublin yesterday to meet the people who nominated him, Deputies Paul Murphy, Ruth Coppinger, Mick Barry and Richard Boyd-Barrett to talk strategy, and “hopefully meet some other left-minded TDs, senators and councillors”.

”There is a huge swathe of anti-austerity, anti-establishment independents we think should vote for a like minded candidate, as opposed to letting establishment parties take a seat. We have a real shot at this. It would be a real upset, obviously. It’s not our traditional turf, but when you look at the numbers of left councillors elected, there is a huge constituency there of people who could give us a number one or a number two,” he told the Limerick Leader.

Cllr Prendiville is running on the Labour panel, saying: “This is about representing workers. That’s what the AAA is about. About organising workers and young people to fight for our rights. Standing on the side of workers against exploitation and against workers being hit again and again to pay taxes rich refuse to pay.”

The northside councillor – first elected in 2014 – would be the first member of the AAA in Seanad Eireann if elected. He is the only person running on the AAA-PBP ticket.

”It would be a real breakthrough for the real left. Not just for the AAA-PBP, but for the broader left,” he commented.

When the Fine Gael-Labour coalition went to the public to ask if they would like to retain the Seanad, Cllr Prendiville campaigned to abolish the Upper House.

Although the public decided to keep the Seanad, Cllr Prendiville said he would campaign in the same manner in future – even if it meant it cost him his job.

“I feel the Seanad is an undemocratic institution. It is built to make it hard for left voices to be heard in there plus young voices. It is built in such a way as to favour the political elite. It is about principles and perks – it is only being used by the austerity parties as a rubber stamp,” he said.