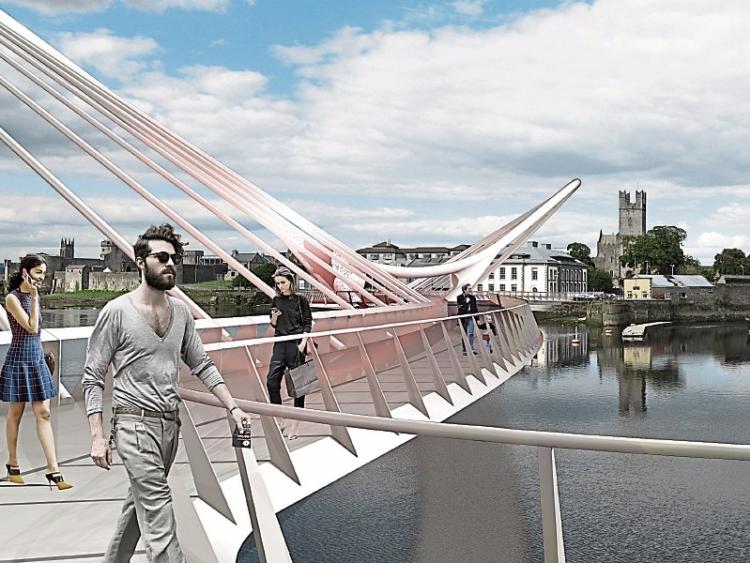 PLANS to build a €18m bridge across the River Shannon have again been criticised by councillors as “pointless”.

Former Mayor of Limerick city, Independent city councillor John Gilligan described the plans as “a bridge too far” and said it makes no sense, as it would act as a deterrent from walking along the boardwalks at the river’s edge, which also cost the council substantial sums to install.

“I’m told that it’ll be an iconic bridge, but what’s iconic is the river,” he argued at a council meeting on Monday.

“I don’t think anyone really wants it, and neither is it necessary. We have three quarters of the walkways built around the Shannon, and the last leg is around the castle and the cathedral. That has stalled now that there’s talk of this bridge, but nobody asked for a bridge. Nobody is going to come to Limerick just to look at a bridge; it’s absolutely ridiculous. Somebody out there is playing games with us, and nobody is being honest and upfront about it,” he told the Limerick Chronicle.

Another former Mayor, Labour city councillor Joe Leddin backed him saying that when the plans come before the council he won’t be voting in favour, as he too believes that the money could be best spent elsewhere.

Minister Michael Noonan approved €6m towards the cost of the bridge in 2014.

“Failte Ireland think it is a very good project and it is either at the top or very near the top of the projects they want to fund,” the minister told the Leader two years ago.

However, councillors this week were left scratching their heads as to who conceived the original idea, and were unaware of Failte Ireland’s drive in what has been called a “vanity project” by some.

Cllr Leddin said that to build a bridge across “what is already an iconic vista with the river, the castle and the Curragower Falls would amount to defacing the view that has been there for centuries.

“I won’t have any part in it when it comes before us,” he added.

A Fáilte Ireland spokesman previously said that the bridge would have a “wow factor” and would link up several tourist attractions within walking distance.

Former Mayor of Limerick, Cllr Michael Sheahan, said at the time of the announcement: “They are very exciting designs. It is in keeping with our new approach to Limerick. What this bridge does is marry the old with the new. It connects the castle, the courthouse, the Curragower, and all of old Limerick with new Limerick. We are looking forward to the future in a most positive way, and I think the bridge will respect all of that,” he said.

A spokesperson for Limerick City and County Council explained that three years ago Failte Ireland “identified a deficit in terms of Limerick's riverside infrastructure between Arthur's Quay and the historic part of the city on King's Island”, following a tourism infrastructure assessment.

The council's Limerick 2030 Economic and Spatial Plan outlines that Arthur's Quay will be transformed into a signature waterfront public space that draws visitors, hosts special events and provides a key stopping point within the city centre and along the waterfront and riverwalk.

​On foot of the Limerick 2030 Plan and Failte Ireland report, Limerick City and County Council carried out a technical study to ascertain the feasibility of a footbridge across the River Shannon linking Arthur's Quay park to the Potato market.

The technical feasibility report was positive and gave an indicative cost of between €10m and €18m.

“​When constructed, the new footbridge link will act as an economic driver by bringing people back to the city's waterfront and reinvigorating the riverfront, will be a new tourism attraction where the user seeks the unique perspective afforded by the new vantage point over the River Shannon and takes into consideration the urban infrastructure and impact towards creating a new architectural symbol which has the potential to transform Limerick City’s image.

They continued: “​The footbridge will complete a circular river walk and form part of a wider tourism investment linking the city’s three bridges with pedestrian walkways and also linking many of Limerick's important buildings and tourist attractions.

​The council is in the process of putting a footbridge design team in place.

​A planning application will be made in due course to An Bord Pleanala.

The council will as part of the bridge design and planning application process hold information workshops and invite inputs from all stakeholders and interested parties.