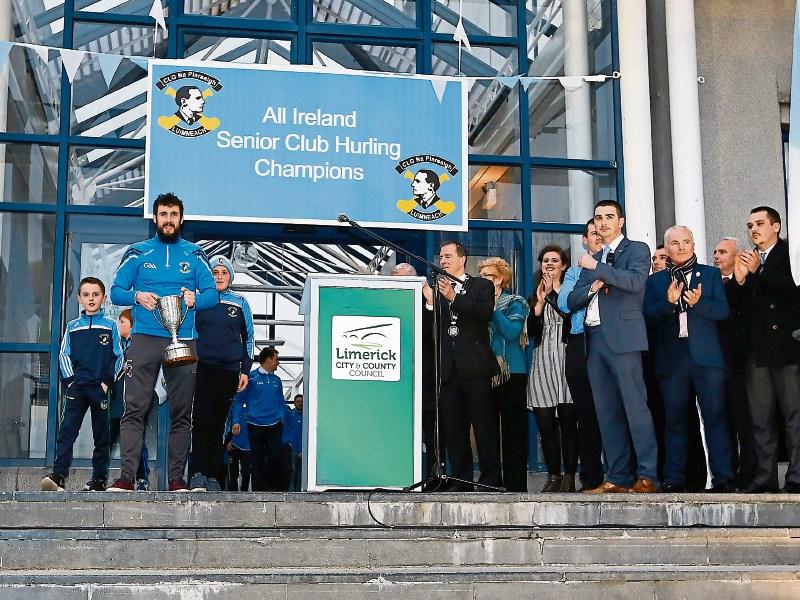 THERE was a sea of sky blue and white flags, and many smiling faces as Na Piarsaigh's victorious hurlers were afforded a homecoming to remember.

The courtyard outside City Hall was packed to the rafters with fans of the Caherdavin club welcoming home their heroes, who made history after becoming the first Limerick side to win the All-Ireland club hurling championship on St Patrick's Day.

Club captain Cathall King said their win over Cushendall of Antrim is "an awesome feeling: one that's hard to describe really".

"After talking to people over the last few days, and finding out what it meant to them, it means more and more. It is just incredible," he told the audience.

Man of the match Adrian Breen, who got Na Piarsaigh under way with a goal in the first minute added: "You dream of this, but you never think it's going to happen. It's a great achievement. What a bunch of lads we have here!"

Deputy Mayor, Cllr Gerald Mitchell said: "Thursday's All Ireland win was a victory for hurling clubs throughout the country. Notwithstanding the fact it represented Limerick's first All-Ireland club final win, it reminded every other club of what it takes to achieve such success".

- For more on this story, including additional pictures, see the Limerick Leader print editions this weekend