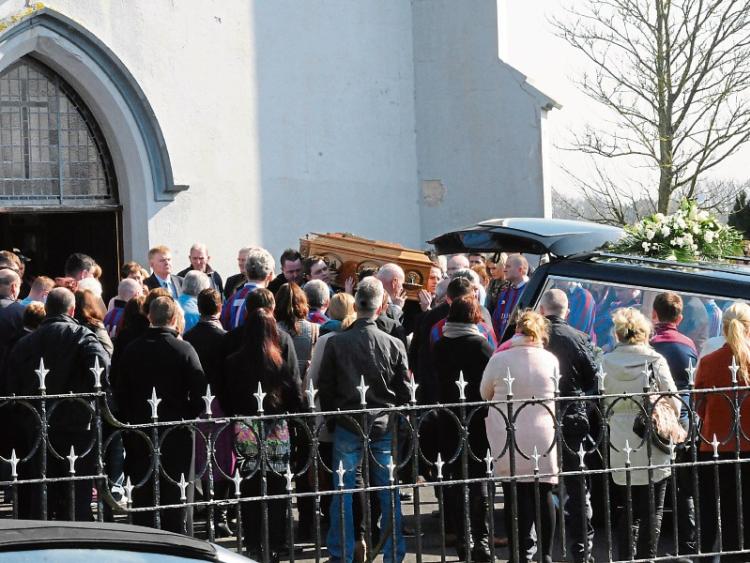 The coffin carrying the remains of the late Shane Mulcahy (inset) being carried from Herberstown Church this Tuesday Picture: Paul Mullins

DURING his 35 years, Shane Mulcahy had lived in Canada and Australia, but nowhere compared to Herbertstown, the village which had a hold on his heart.

At midday on Tuesday, locals congregated inside the Church of the Sacred Heart on the pretty hillside village to say farewell to the “funny, fearless and charming” plumber who died in a road collision last Friday morning.

“There are so many unanswered questions about the final hours of Shane Mulcahy’s life. Where was he going in the early hours of Friday morning? What caused him to lose control of his car and crash? How long was he there until he was found,” asked Fr John Donworth, PP, Pallaskenry, a first cousin of Shane’s late father John Mulcahy.

“These are questions that may never be fully answered. The sad truth is the Mulcahy family have lost another member and they are heartbroken.”

Shane’s sister Naomi died 13 years ago in a car crash outside the village of Hospital that also claimed the lives of two other teenagers. She was just 16 years of age. Naomi’s father, John, died suddenly six months earlier after watching Munster beat Gloucester in the European Cup.

Addressing the congregation Fr Donworth said that Shane’s funeral was a “very sad occasion” but “you can also focus on the good side”.

He recalled how he enjoyed many a Christmas dinner with the Mulcahys -  “a great house for food”.

“I used to say they were carnivorous – no animal or bird was safe with the Mulcahys around,” he smiled.

“They were not into this vegetarian nonsense I can assure you! When John was younger he would bring home anyone at any hour and his poor mother would start cooking a meal – steak and onions, any time. That was the type of house the Mulcahy house was.”

Shane and his brother Richard, he said, were like “two little small bears” when they were young.

“You would need the patience of Job when they were small  – I was often there when the antics went on. They were great pals and had great times.”

Fr Donworth recalled hearing the tragic news of Shane’s accident. “I always turn on my radio before I get up and on Friday morning when the accident happened, I heard it was somewhere near Herbertstown. Road closed. What was my first thought? I hope it’s not at the scene where the last accident happened. Little did I know it would involve the Mulcahy family again. This is indeed a very cruel blow for Aideen, Richard and Aoife. Losing a son or a daughter is terrible when it happens. Losing a second one is just plain awful.  Aideen and the family will need a lot of listening ears and support in the days, months and years ahead.”

One elderly woman rested her hand on Aideen’s shoulder for a brief moment as she returned to her seat after receiving Holy Communion.

Shane enjoyed his life. He spent a short time in Canada and Australia. “He didn’t like really like Australia - they hadn’t a great sense of humour.

Shane’s good friend Johnny Cooke spoke fondly of his bond with  Shane  which developed while the pair were in secondary school together.

“Shane was funny, fearless and charming,” said Johnny who chose Shane to be best man at his wedding. A photo of Shane in his best man suit stood on a small table flanked by two tealight candles, one on either side. “Shane had a mischievous streak,” smiled Johnny. “Shane didn’t have much of a filter and he would say things that many people wouldn’t but there was absolutely no badness in him.  Everything was done out of a childlike over exuberance for life.”

“He was a homebird at heart - he loved this place. He was capable of doing anything in any situation  which brought a wonderful unpredictability and excitement to his company.

“Shane lost his dad and sister in 2003 and this hit him hard - it’s impossible to understand  why such tragic things happen to such good people. I certainly won’t have the privilege of such a friendship again,” he said to a huge round of applause.

Next, Shane’s sister Aoife stood at the altar. With all the strength she could muster, she thanked the people of Herbertstown “who have taken care of us so kindly”.

She spoke of Shane’s dedication to Herbertstown soccer club - who performed a guard of honour outside the church –  and of his true love, Liverpool FC. A club jersey was folded neatly at the foot of the altar.

“He is remembered for his hilarious commentary on social media about life in Herbertstown.

“He was very proud of being barred from Lance Armstrong’s Twitter page,” Aoife smiled.

Speaking directly to Shane she thanked him for his generosity of spirit, in particular “caring for mammy”.

“The one thing she loved most about you is that you were uncannily similar to daddy.”