Punters experience highs and lows of the famous racing festival 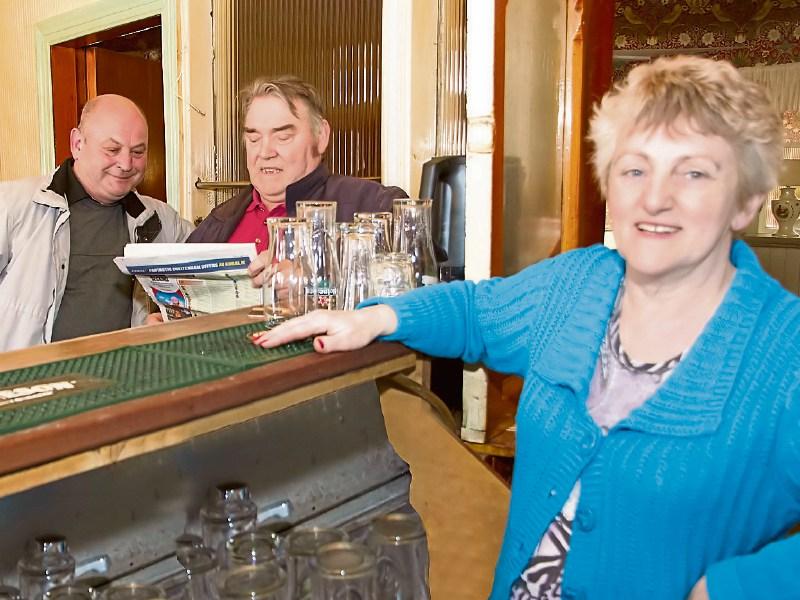 James Browne, Mike Lundon and Mary Howard study the form ahead of the opening race in Cheltenham, in Howard's Bar in Bruff Picture: Ita West

Paddy Murphy is standing bolt upright in the middle of his local, Mary Howard’s in Bruff.

There’s Michael Lundon to the left of him, James Browne to the right.

In his hands Paddy holds a Cheltenham racing pullout from the Irish Daily Star.  More mind-boggling stats leave his lips.

“Michael,” he says, raising his eyes from the page, “you have been there a good few times. It has improved a lot but there was a time when you could queue for an hour and a quarter or an hour and a half – for a toilet.”

His love affair with horse racing, in particular National Hunt, was sparked back in the 1960s when, as a schoolboy, he would visualise the long strides being taken by the great Arkle up the legendary Cheltenham hill  as the commentary from Prestbury Park came in over the wireless.

Now it's 1.25pm on Tuesday, the opening day of the 2016 festival, and the love affair shows no sign of fading. At the thousands in the grandstand build towards the legendary first race roar, Michael is in Mary’s Place surrounded by a few locals who have stepped in out of the unseasonal sun to study the form.

For those who haven’t been, Mary’s Place is a bit like one of those Russian Matryoshka dolls – the charming, intimate bar area leads into two more rooms, sharing similar size and character. This lunchtime, however, the punters are staying up front in the main bar, with all eyes firmly fixed on the 26-inch Toshiba television.

“They’re off,” says Mary, the proprietor, shining glasses as the curtain finally goes up at Prestbury Park on the dot at 1.30pm.

“I’m going for some of the Mullins ones,” says Michael.  “There is Min in this first race and Annie Power in the Hurdle. I put on a little bit of money, up the street.”

James Browne, the nearest to the television, and the closest to the door, takes out the spectacles and wipes them clean.

“I follow McManus’ horses. I love watching it – I’d love to go over there.”

Min has been joined by Altior.  “He’ll do it too,” says Paddy, leaning in over the counter, as Altior asserts his authority at the final flight. Heading up the hill, his gallop is getting stronger.

“Ruby will be crying,” Paddy adds, as Nicky Henderson draws first blood, defeating the 15-8 Willie Mullins favourite by seven lengths. The Daily Star supplement is pulled back out. Time to make amends.

At the bar counter in Jack Clancy’s on the other end of the town, Pat Browne is purring with satisfaction underneath his Bavaria baseball cap.

Like Michael Lundon, Pat is somewhat of a Cheltenham aficionado having been to Prestbury Park five times.

The man beside him, John Foley, however, claims to not follow the racing at all and swears blind that despite his wide grin he hasn’t indulged in some betting.

Pat has another two horses backed -  Enda Bolger’s Josies Orders, and On The Fringe which runs on Friday.

Does he have inside trading knowledge?

“I do. I go back riding out for Enda, sure,” he says, tidying up some tobacco into a neat rollie before heading outside.

“Josies Orders is a good animal now. That horse would keep running forever and Nina Carberry is riding it. She’s brilliant – God is good!”

As the clock ticks onwards towards 3.30pm, everyone is in position in front of the television screens in South’s bar on O’Connell Avenue in the city. The relaxed have bums on stools, the nervous stay on their feet. The majority here today are in either of two camps – My Tent or Yours, or Annie Power. And, this afternoon Annie’s cruising. Ken Wylie had a tenner on her and is “sure she is going to win!”

Aileen Walshe, from North Circular Road, is on The New One.

“They are all talking him up in the reviews but I am worried about Annie Power. She’s bottom weight - but you never know!”

She has never been to Prestbury Park but hopes to make it some day. “I watch it from the stool. It’s a great spot for it here - we’re having a ball. I love a good tip - it’s brilliant to come in with a few bob. I hate losing!”

The chestnut mare is doing all the running so far. She’s followed in second by My Tent or Yours. Then, on the outside, is The New One. Nichols Canyon is just in behind Annie Power in fourth place.

The writing’s on the wall for Aileen. She squints her eyes, grits her teeth, wills The New One to gain some yards but there’s nothing doing.

Aileen is despondent. “I should have backed Annie,” she says, head down in her phone.

“It was him put me off,” she says, looking up at the big screen on which the retired jockey Tony McCoy is giving his verdict.

“He said she wasn’t jumping well!”