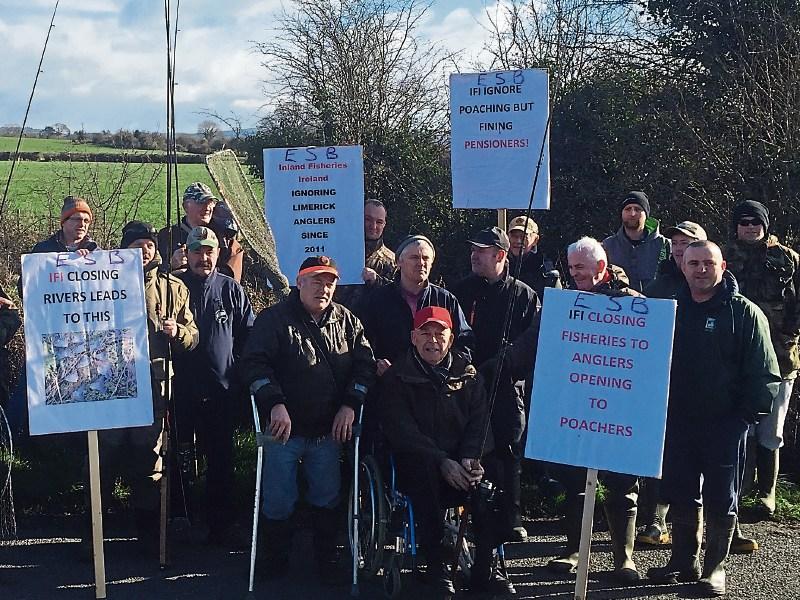 A “FISH-IN” to demonstrate the anger among anglers over new regulations was attended by dozens of protesters recently.

They gathered at the Longfield in Scart alongside a stretch of the Mulkear that has been designated salmon fly fishing only. The Limerick and District Anglers and Shannon Mulkear and District Anglers Associations say this section is a deep slow moving part with high overgrown banks that is not suitable for fly fishing and more suitable for spinning.

This is the equivalent of “flying a kite on a calm day” and no one will fish it, they say.

The ESB say they have completed significant work on the river over the last number of years and are “dismayed to see salmon numbers continuing to decline”.

“The short extension of the fly stretch as an additional conservation measure is aimed at protecting an endangered species while at the same time facilitating a wonderful angling experience,” said an ESB spokesperson.

A number of elderly and disabled anglers attended the protest as they fish there due to its close proximity to the road and ease of access.

James O’Donnell has difficulty with his mobility due to an illness from when he was a child.

“This is not the first time the decisions of those responsible for the management of the fisheries in the region has impacted on me. A current ban on salmon fishing on the Shannon in Limerick city out of boats had caused me to cease boat fishing and displaced me 15 miles from where I and my family would have fished all my life.

“Now this ban on spinning may see me off the river bank altogether. Due to my illness I do not have the free rang of movement required for fly fishing,” said Mr O’Donnell.

Rob McNamara, 86, said the increase in permit costs of 154% in recent years and now this move says to him that “ESB want to push anglers off the river”.

“I had decided to give up fishing two years ago as I couldn’t afford the increase in permit costs but my grandkids stepped in and purchased them for me. Now the new ban on spinning on this stretch will more or less finish my angling altogether. Due to the onset of rheumatoid arthritis I cannot fly fish and am not able bodied enough to navigate through rough terrain and open dykes of other sections of the river. While access isn’t exactly ideal on this section it’s a hell of a lot better than other areas.

“I have enjoyed fishing the river for the last 60 years and especially the social aspect since my wife passed away five years ago,” said Mr McNamara. A spokesperson for the clubs said they are not going to sit back and let their most vulnerable members be treated in such an “appalling manner”. They are organising a protest outside ESB’s head offices in Dublin.

An ESB spokesperson said in October 2015 they engaged with IFI, local angling clubs and stakeholders on a review of the 2015 season with a view to making some changes for 2016 on the Mulcair and lower Shannon.

“Conservation of the fish stock on the river was a key component in the review while at the same time accommodating angling activity. A key element in relation to the Mulcair was the fact that the river has not reached its conservation limit. The Standing Scientific Committee on Salmon determined that the river was only reaching 87% of its conservation limit and therefore open under catch and release conditions for 2016,” they said.  In January 2016, ESB communicated the changes being implemented for 2016, “most of which relate to reductions in various permit prices”.