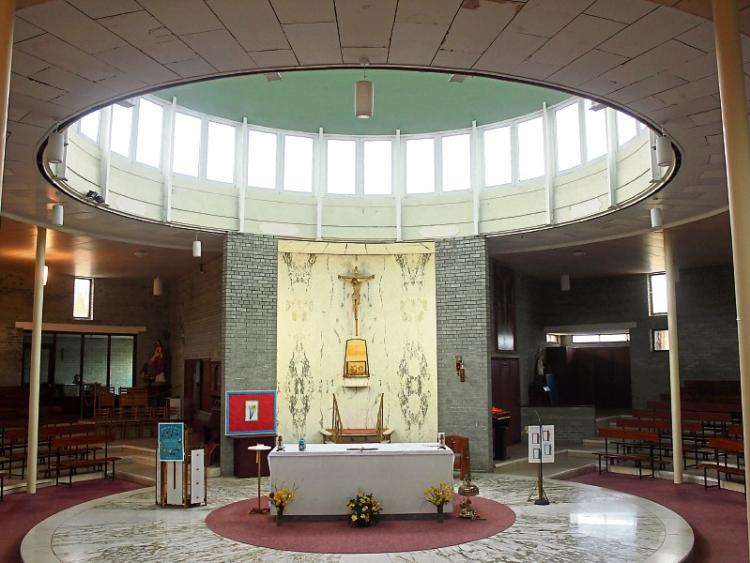 Roof repairs: The Church of the Assumption of the Blessed Virgin Mary

PARENTS of a First Holy Communion class have expressed “extreme disappointment” after learning that their children are unable to celebrate the special occasion in their parish church due to a leaking roof.

A meeting was held in Ballylanders to inform parents that the Church of the Assumption of the Blessed Virgin Mary is “not in a fit state” to allow 16 children to receive the sacrament of First Holy Communion there on May 7.

According to the local parish priest it will be closed at the time to facilitate repair works.

But while Fr Thomas Breen says that there is a “major” health and safety risk, a parent who contacted the Limerick Leader says that “it’s not as if the roof is going to fall down”.

“It’s more dampness,” said the father whose son was due to receive his First Holy Communion in Ballylanders Church on May 7.

“The problem is the roof is leaking. There isn’t rain bucketing through the roof,” continued the parent who said he would be “extremely disappointed” if his son had to make his Holy Communion in another church.

“The way I look at it is all my other kids have received their Holy Communion and confirm-ation in Ballylanders Church.

“It’s not the same going elsewhere,” he said.

He also expressed frustration that the repair works weren't carried out sooner, or, indeed, couldn't be postponed until after May 7.

He said that from what he can see, the condition of the church “doesn’t look like a major health and safety hazard”.

“It was mentioned at the meeting about changing the date of the Holy Communion but, as we said, we all have various things booked now.

“If we were told that the repairs were starting around this time, then we could have moved. It’s an inconvenience for people who have to travel from outside.

“Even for the confirmation now, we are not even going to be 100% sure if it can go ahead there either.”

When contacted, the parish priest of Ballylanders, Fr Thomas Breen, said that while it was “unfortunate” that the First Holy Communion has to be moved to the neighbouring parish of Galbally – located four miles from Ballylanders – it was a necessity due to the leaking roof.

“The only reason the church has to be closed is to repair the leak - it’s a major leak, major," he said. “There are several leaks. It’s a circular church and basically all the windows in the circle are leaking."

When asked how long they have been leaking for, he replied: “It’s a long-standing problem. There is progressive damage happening. The point is we have a start-up date to do the job. We had a meeting of the parents of the First Holy Communion children and they agreed that we would use the neighbouring parish’s church in Galbally for this once-off.”

Fr Breen said that the majority of parents present at the meeting were in favour of the move – albeit “reluctantly”.

“We are all reluctant but because of the major nature of what has to be done some people have to be inconvenienced unfortunately. It didn’t go to a vote but the majority were in favour.”

According to Fr Breen “there are weddings coming up but they are on different dates. The closure of the church doesn’t affect the weddings at all.”

The church is due to be closed on March 21 but Fr Breen says that it’s too soon to say how long the works will take.

“It’s a roof – who can tell you what the weather will be like? The roof has to be stripped down to the joints and built up from there.”

Fr Breen said it was not an option to postpone the repair works.

“Any of us don’t like to see the First Holy Communion moved. It’s an inconvenience to me as a priest and to the whole school population but everybody had to have a bit of give and take.”

There is also confirmation scheduled to take place on May 27, but, again, there are no guarantees that the church will be ready in time.

“There has been constant dripping over the years.”