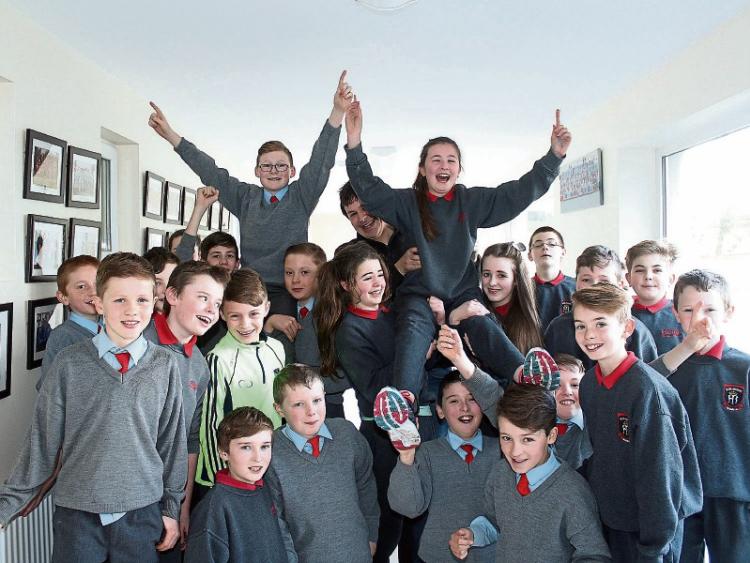 “We are going to keep our promises and keep going to the end,” polltopper Eoghan Doherty said. Among other issues, he campaigned for better library books to replace the old, tattered ones that date “from the 1980s”; putting a Bug Hotel in place (“We have farmers in our group”) and more play equipment, such as giant chess.

Eoghan and his team called themselves Ré Éire or Ireland’s Era.

“It means it is our time to come out and shine, to do what is right, to come out with confidence and make stuff better,” explained the sixth-class pupil who exceeded the quota of 33 on the first count.

Meanwhile Colm O’Connor of the Playground Party, which promised “Fun for Everyone” was also elected on the first count. “Most of our manifesto was about the play yard,” he explained. One of their demands, he told the Limerick Leader was for a Buddy Bench where, if a child has no-one to play with, he or she can go and sit thereand someone will go and play with him. Another campaign demand was for a nature garden. “A lot of students like to play. It is nice to have a new thing,” he said of his approach.

School Scholars’ candidate Jack O’Connor and his election team were the first to produce a campaign video, inspiring the other teams to follow suit. One of their key slogans was a coat hanging space for every pupil which was deftly illustrated on screen as two boys eventually came to blows over the same coat hook. They also wanted to have a light monitor in each classroom, to turn on and off the lights.

The Ahalin election was an all-school affair, principal Cormac Behan explained. “When they put up the first election posters outside the school, we decided to have our own,” he explained. “We also decided we would run our election like a real election, not first past the post but on the Single Transferable Vote system.”  It was, he added, confined to school issues.

Six candidates put their names forward and each had a team of three with them. They chose party name, decided their manifesto and then produced posters, flyers and election videos.  They also held a Town Hall meeting when all six candidates pitched for votes. Ballot papers were drawn up and voting took place last Friday.

Then on Monday, the chief returning officer, sixth class pupil Ewan Faughnan led a team of six to carry out the count. “It was a lot of work,” he told the Leader. “It took a lot of time.”

The main sticky issue, he said, was deciding on spoiled votes, of which they had three,  but he had Enda Moran as his go-to man. Enda had done his research on proportional representation and knew about surpluses, counts, eliminations and distribution of votes. The total electorate was 147 and 137 voted, a turn-out not matched anywhere in the adult election around the country.

The  total valid poll was 134 and the quota was 33. As the classes waited for the announcement, the chatter in the hallway resembled that of any count centre.

“Have you any chance of winning?”

And just like in any election, there were also the candidates who didn’t make it.

Happily, the three were not too upset. They were Mike Molloy, Scoil Nua one of whose demands was for more sports tournaments; Gearóid Fenniman, An Crann who wanted a fourth set of goal-posts and the only female candidate, Deirdre McMahon whose Scoil na bPáistí wanted jungle gym for the younger pupils.

Virtually every pupil asked knew the names of those who had won election in County Limerick.

But not surprisingly, they were keeping their focus on their own candidates, and on what they might deliver before the school year ends in June.