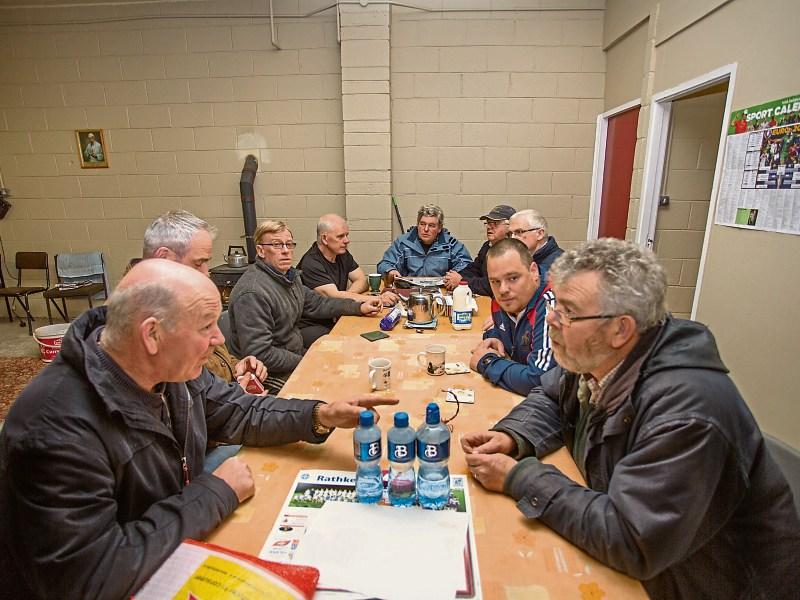 Anthony Frawley, front left and Frank Kelly, right, pictured deep in conversation around the table with other members of the Newcastle West Men’s Shed

THE Mens Shed has caught on in a big way in Newcastle West. And the “shed” they have leased now offers an intriguing blend of activity and calm to its many adherents.

“I love it here, the company, the craic, doing a bit, making a few things,” says Frank Flynn, who is now retired after nearly 40 years with a telecommunications company.

Frank is just one of a growing number of regulars who visit the shed which is open during the day from Monday to Friday and now operates also on two nights.

Monday evening, explains chairman Denis Buicke, is when the men gather and make out their plans for the week. The additional, Thursday evening, is for tidying and cleaning.

“It was Gerry O’Donovan who started the whole thing,” Denis explains. “But we didn’t think it would such a big thing. There is a big need for it.”

The philosophy behind the Mens Shed movement, which began in Australia and has spread worldwide, is to provide a dedicated, friendly and welcoming meeting place where men can come together, share their skills and knowledge with others, learn new skills or redevelop old skills.

But, importantly, there’s no pressure. Men can just come and have a chat and a cup of tea if that’s all they are looking for.

“The whole idea was there was a need,” Denis explains. “We went to Killarney to see how it was run there. The biggest problem we had was getting a charity number.”

That problem has since been sorted and a lease signed on a suitable premises, across the yard from the West Limerick 102 radio station.

The first big project undertaken by the men was to put the “shed” in order. The unit had to be cleaned and painted and a space cleared for work. Now, pallets are stacked up, ready to be cut up for kindling and bags of kindling, ready for sale, are piled neatly along one wall. Window boxes sit, ready to be planted and bird-boxes wait to be painted up.

But within the unit, a separate, and cosy, meeting space has been created, where men can meet around a long table, read the paper, have a mug of tea, chat and make plans. This space is warmed by a stove and also contains a kitchen. Shortly, it will have its own snooker table.

The JP McManus Foundation helped with the setting up costs and with  income from the sale of products as well as subs paid by the men, they are tipping along in the black.

Gerry Kelly is an enthusiastic member. “We didn’t know too many when we came first. It’s a chance to make new friends,” he says. “ There’s good banter and we work away together.”

And yes, Denis says, there is talk and sharing and people do open up. But, he also stresses, it is an alcohol and drug free zone.

“It is therapeutic in more ways than one,” another man explains. “It gets your mind off things.”

Another man describes it as being “pro-active”. “You are better off doing something,” he believes.

For Anthony Frawley, it has proved to be a great boon. He suffered a serious stroke almost four years ago and has been unable to return to work since, although he is hoping to get some part-time work. “It is a great outlet for me. It is nice and relaxed there. You can come in at 10 in the morning or you can come at three in the day. There is always someone here,” he says. “This is brilliant.”