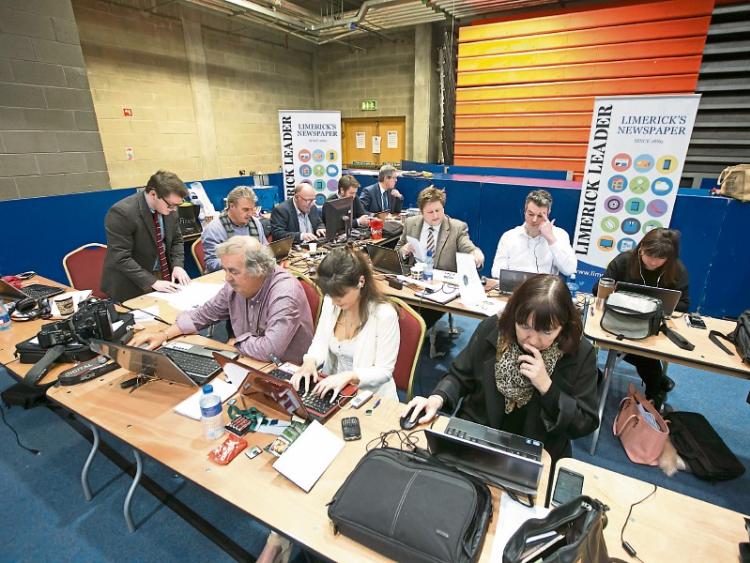 THE UL Arena was host to a marathon of the digital kind on Saturday for the duration of the general election count – and the Limerick Leader was running it.

For 17 hours, a 12-strong team from the Leader delivered a blow by blow account of the action and a truly global audience tuned in. There were tweets from those following the action from Rome to London, while our website registered traffic from across the globe.

Records were shattered as traffic to our website LimerickLeader.ie rocketed. The country’s most popular provincial newspaper website was hailed as the best way to follow the Limerick count.

“The reaction we were getting from shortly after the blog began until the very end was absolutely amazing,” said Leader editor Alan English.

“We were getting countless tweets from readers enjoying the rolling news. It was clear that huge numbers of Limerick people found our website service to be the best way of following the count, minute by minute.

“It’s a different form of journalism, but the principles are the same – it’s all about telling the story in the most engaging way possible.”

I'm tremendously proud of the @Limerick_Leader team who worked flat out for 17 hours on this count. It's been fun bringing it to you! #GE16

Along the way, we provided box tallies, reaction from candidates and their supporters, numerous tweets from readers who were enthralled and also video clips capturing the key moments as they happened.

Traffic to the live blog showed about a 60% weighting towards mobile phone users, while that figure soared to 80% on Facebook. Of those feeding from the social media site, the largest audience – a 24% share – was women aged 35-44.

The large majority of those tuning in, upwards of 80%, were based in Ireland, local and national, but we also had visitors from the UK, USA, Belgium, Australia, Spain, Canada, Germany, France and many other countries, reflecting the huge interest abroad in the outcome of a tense election in both Limerick constituencies.

You interacted with us in your thousands – we hope you enjoyed it. We certainly did.