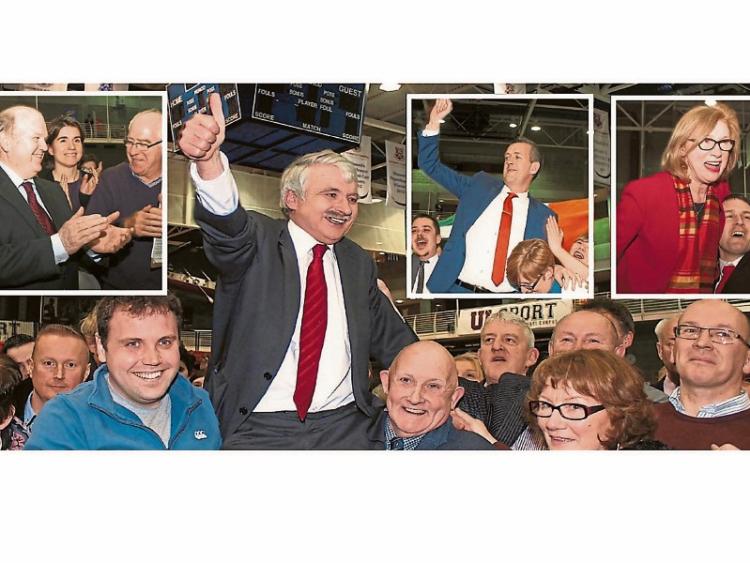 LIMERICK City’s four victorious TDs are all expected to take on high-profile roles –  if an administration can be formed in the new Dail.

With the counting completed in Limerick City – which saw a return to the top of the poll for Willie O’Dea, a drop in support for Finance Minister Michael Noonan, and the election of two left-wing politicians – thoughts are now turning to the role the city's four representatives in the 32nd Dail can play.

Should Fine Gael return to office to lead a minority government, many feel Mr Noonan – who took the third seat in the City –would be best qualified to take on the finance brief, which he has held for the last five years. Meanwhile, Mr O’Dea is also likely to play a key role on Fianna Fail’s frontbench team, whether the party is in opposition, or government.

Speaking this Wednesday, the former Defence Minister refused to be drawn on the role he would like, saying: “I haven’t even thought that far ahead. My whole focus was on winning the election and [positions] is not something I have given consideration to. It is solely a matter for the party leader”.

Mr O’Dea has also said he maintained his belief that, despite his huge surplus of 3,646, Fianna Fail would not have won a second seat in the four-seater City constituency.

More forthcoming on his hopes for his role in the new Dail was Sinn Fein TD Maurice Quinlivan, who marched into the second seat ahead of the city’s two Cabinet ministers.

Mr Quinlivan will meet his new party colleagues in Dublin this Thursday, and said he will “definitely” secure a spokesperson’s position if, as expected, the party remains in opposition.

With Labour set to return to the opposition benches following its disastrous election campaign, it is certain Jan O’Sullivan, one of the few TDs to hold on to their seat, will be given at least one portfolio – possibly more.

The Education Minister – who will retain this role until a new Cabinet is formally appointed – has served as her party’s spokesperson on education and health when Labour was last in opposition.

She has also held two junior ministries before her appointment to cabinet in 2014.

“I obviously have an interest in education. I am also interested in the childcare area,” she said, “We are having our first party meeting [this Thursday].”

But she added that without the election of a Taoiseach next Thursday, March 10, the Dail will disband until after Easter, “so it is quite possible I could still be caretaker Minister for Education for a month or so”.

Meanwhile, with the Seanad Eireann election potentially just around the corner, sources have told the Limerick Leader that former Fine Gael deputy Kieran O’Donnell, who lost his seat at the last count, may be considering a run.

While Mr O’Donnell was not available for comment following his elimination this week, it is understood he is weighing up his options, with his cousin Cllr Bill O’Donnell saying: “No doubt we will see an awful lot more of Kieran O’Donnell in the future”.

Seperately, Fine Gael councillor Maria Byrne said she is not ruling out a bid for the Upper House.

”I am always open to consideration. But the party has lost a lot of TDs now, so it would be a very difficult campaign. I’ll have to weigh it all up, and see who is running,” she said.

While Fine Gael managed to retain the two seats they held in County Limerick, they failed to repeat the trick in the city – despite coming agonisingly close through Kieran O’Donnell.

Cllr Daniel Butler, who was part of the Fine Gael tally team throughout the count, pointed out that his party remains the biggest in Limerick City, with 28.61% of the first preference vote.

“It became quite a localised election. A lot of Maurice Quinlivan’s votes came from the northside of the city. But when you go to places like Raheen/Dooradoyle, he was getting very little at all.

“You can see where candidates targeted their campaigns,” he said.

Mr O’Dea said he does not feel the 633 transfers from his surplus to Mr Quinlivan would have benefitted an FF running mate.

He said: “A lot of my votes would have transferred to Maurice Quinlivan anyway from what we saw. Boxes in Thomondgate and Ballynanty were transferring to Sinn Fein. People voted locally, as they are entitled to do.”