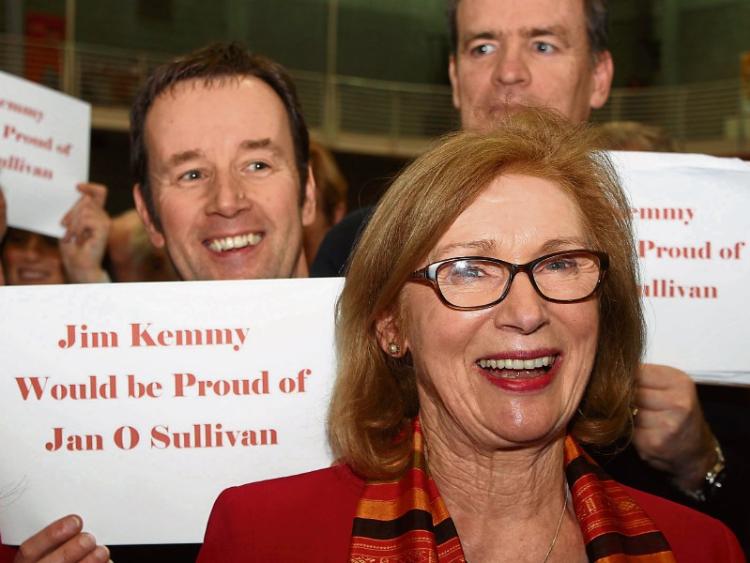 EDUCATION Minister Jan O’Sullivan has hit back at claims many of Jim Kemmy’s supporters have switched to the Anti-Austerity Alliance (AAA).

She claims that comments made during the course of the election campaign by the AAA represent “a complete misunderstanding of what Jim Kemmy was about”.

When she was elected, Ms O’Sullivan’s supporters held up posters stating the late TD would be “proud” of her.

In the run-up to the election, Cllr Cian Prendiville pointed out that while Mr Kemmy took down the government in 1982 over the tax on children’s shoes – Labour has presided over “far worse”.

However, speaking after her election – which ironically was in part thanks to a transfer of 721 votes from Cllr Prendiville once he was eliminated – Ms O’Sullivan said: “It has been said to me over the years that Jim Kemmy would not have done such and such a thing. But Jim Kemmy was my mentor. He was a fantastic and very very courageous public representative who was willing to put his head out on things that were not popular at the time. It is just a complete misunderstanding of what Jim Kemmy was about to say the kinds of things they have been saying recently – what he might or might not have thought.”

She said people saying what the AAA says now are only “populist things”.

“They never say anything to lose them votes,” Ms O’Sullivan added.

The Labour TD made a Lazarus-like comeback to take the final seat, after initially being over 800 votes behind Kieran O’Donnell.

She added: “Jim would be very proud tonight. We were in a very small party when I got involved in supporting Jim [Democratic Socialist Party] and we eventually merged with the Labour party. One of the reasons Jim wanted to do this, and one of the things important to him was to have a legacy, not just be a one-standing independent, but part of a movement, part of a group. I think he would be particularly proud we've kept the seat ever since he had it - and we intend to keep retaining it.”

However, Cllr Prendiville maintained his stance.

In a statement to the Limerick Chronicle, he said: “It's simply a fact that huge numbers of Kemmy supporters have switched to supporting the AAA, including many high profile people who participated in Kemmy's 1977 series of adverts.”

He added: “Labour have been routed, a real left is now rising to replace them, and that is what has Deputy O'Sullivan so worried. While we didn't quite overtake Labour in Limerick, we fell just 278 votes short, which is not bad given they had a 100-year head start.”

Cllr Prendiville – who secured 5,244 first preference votes, and was eliminated at the fifth count with a total of 6,724 – said: “There is a huge contrast between the actions of Kemmy when he took down a government in 1982  over a tax on children's shoes compared to the actions of Labour in government where they rolled over.”