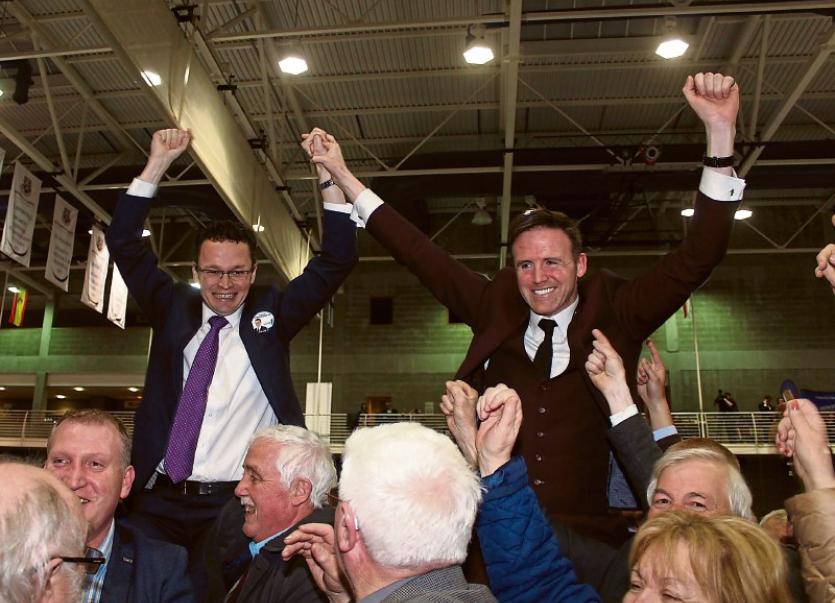 FIANNA Fail has topped the poll in the county with Niall Collins romping home on the first count while Fine Gael, despite a slippage in its vote, saw both its candidates elected: outgoing TD Patrick O’Donovan and first-time candidate Cllr Tom Neville.

The two were neck and neck through six counts with Tom Neville edging past Patrick O’Donovan by 78 votes on the final count.

In the end, the much anticipated threat from Independent Emmett O’Brien failed to gather enough momentum although he was the last man standing at the end of the sixth count and just 810 votes away from taking a seat.

Fianna Fail Niall Collins’ superlative 12,276  first preference votes, marked a return to the heady days of the past when his uncle, former minister and MEP, Gerry Collins, regularly topped the poll.

But even as the party was celebrating Niall Collins’ success at getting elected on the first count, the question was being asked by some: What would have happened if Fianna Fail had run two candidates?

Independent Fianna Fail candidate, Richard O’Donoghue was in no doubt. Had there been a second candidate, as he and others had argued, they could have taken a second seat, the Adare Rathkeale councillor said. And he believed the election bore this out.

Niall Collins’ vote plus his own votes and those for Independent Emmett O’Brien added up to 48%, he pointed out.

However, the newly re-elected Niall Collins rejected such a scenario.

“What you have to remember is the base which we are coming from,” he said. “I came to this count centre five years ago and I got the last seat without reaching a quota.”

"We have said and I have said personally under no circumstances are we going in to prop up a Fine Gael proposition. We have worked long and hard to rebuild our credibility as a political party and I think all that would just go for nought if we were to turn around and step into coalition with Fine Gael."

The big talking point in the count centre however was the Independent Emmett O’Brien who had been hotly tipped to take the third seat, or even the second.

In the event, he clocked up 5,432 first preference votes, a highly credible achievement for a first time general election candidate.

He steadily gained votes but not enough to gain him the seat. His biggest gain came when Sen James Heffernan was eliminated and his transfers put him just 810 votes behind Patrick O’Donovan at 9,481.

Heffernan’s transfers pushed Tom Neville ahead to 10,369, to take the second seat without reaching the quota and 78 votes ahead of his party colleague, Patrick O'Donovan on 10,369.

Sinn Fein candidate Seamus Browne polled 3,347 first preference votes (7%) but this vote failed to build on what had been achieved  in the local elections.

Richard O’Donoghue received 2,855 first preference votes but was eliminated on the third count.