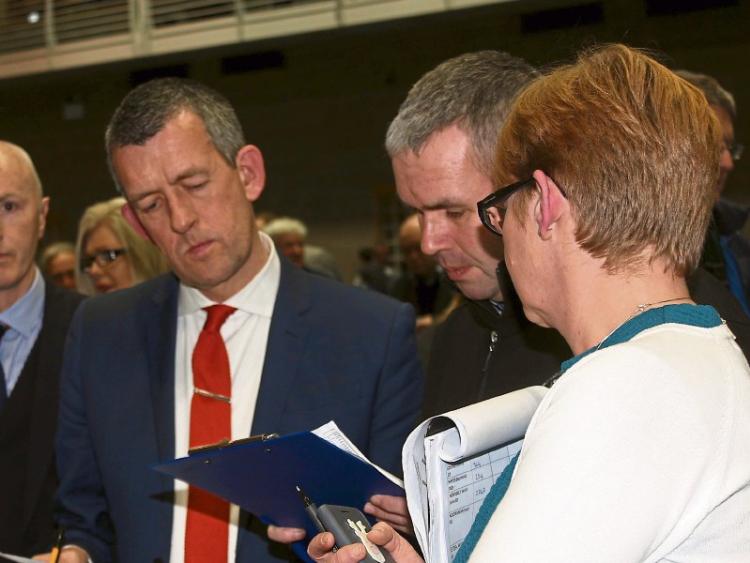 THE fourth count in Limerick City has been completed, with Anti-Austerity councillor Cian Prendiville being eliminated.

No further candidates have yet been elected to join polltopper Willie O'Dea in the 32nd Dail.

Once again, no candidate has reached the quota of 9,353.

Following the elimination then of Sarah-Jane Hennelly, Social Democrats, some 3,620 of her preferences were distributed.

This saw Finance Minister Michael Noonan add 370 votes to move to within 762 votes of the quota with 8,591 votes.

Sinn Fein councillor Maurice Quinlivan secured a transfer of 374 putting his vote at 7,025.

Cllr Prendiville was eliminated with his 6,724 votes now being distributed - despite his receiving a huge 1,228 of Ms Hennelly's transfers.

The fifth and final count is expected in the next 90 minutes.

Mr O'Dea topped the poll earlier this evening, with a first preference vote of 12,999, over 3,000 clear of the quota.

It is looking increasingly likely that some, if not all the remaining three candidates in Limerick will be elected without reaching this.

Following Cllr Prendiville's elimination, a number of Anti-Austerity Alliance activists led a chant of 'No way, we won't pay'.

No further candidates weren elected in Limerick City following the third count, which saw the distribution of four candidates votes.

Independent candidates Nora Bennis and Desmond Hayes, plus Denis Riordan and James Gaffney were eliminated following the second count, with their transfers of 2,306 being allocated.

Social Democrat candidate Sarah-Jane Hennelly was eliminated, and her vote of 3,620 will now be distributed.

Her transfers will now be distributed with the fourth count due in the next hour.

Earlier, the second count in Limerick City has been completed, with no further candidates elected to join Willie O'Dea in the 32nd Dail.

But Finance Minister Michael Noonan and Cllr Maurice Quinlivan have crept closer to the quota of 9,353.

Their transfers will now be distributed, with the third count expected in the next hour.