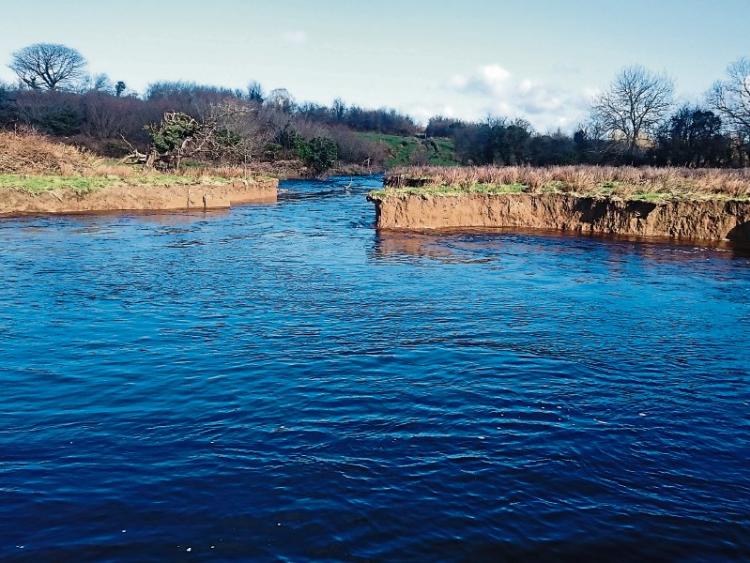 Broken off: the new channel has caused serious concerns in Abbeyfeale

A NEW channel cut by the river Feale is a serious threat to the Abbeyfeale water supply, local man Jim O’Connor warned this week.

And the concern is that the new channel, which bypasses the town’s water treatment plant, could become the new course for the river.

“What we said would happen, has happened now, or at least partly,” said Mr O’Connor, a supervisor at the town park which overlooks the river.

In 2014, Mr O’Connor warned  that the river could open up a new, straighter course  instead of winding its way round a U-shaped bend.

Now, following weeks of heavy floodwaters, that has happened. A new channel, which Mr O’Connor estimates to be about half a mile long, has opened up.

“If it ever happens that we get a good summer, most of the water would flow down the new channel leaving only stagnant water at the pumping station, or else leaving it dry. And if we get a wet summer, it will cut the channel even more,” Mr O’Connor warned.

Already a  new island has formed in the river and eventually, Mr O’Connor said, an oxbow lake could develop as the new channel deepens and cuts off the U-bend.

“I have notified the schools to come and see the birth of an ox-bow lake,” he told the Limerick Leader. In 2014, both Mr O’Connor and local councillor Mayor Liam Galvin, called for urgent action on the issue. And they also asked the then Limerick County Council to liaise with the OPW on the matter.

“The next flood could take the river away from the treatment plant,” Cllr Galvin said at the time.

The council’s response was that they would ask an engineer to investigate.

But no action has been undertaken since.