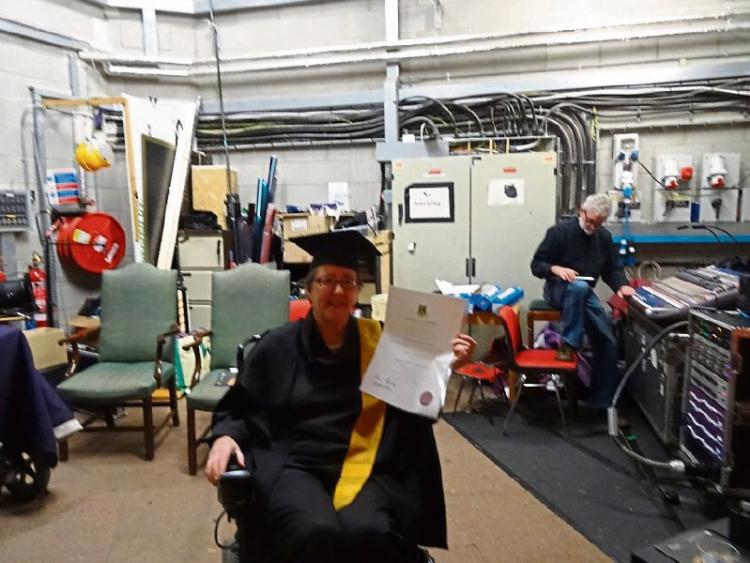 Dr Margaret Kennedy, a wheelchair user, who was located in the stage side-room at her graduation ceremony

A WOMAN in her 60s who is a wheelchair user, has issued a complaint to the University of Limerick after, she claims, she was seated in the “back room” of the University Concert Hall during her graduation ceremony.

Dr Margaret Kennedy, aged 63, said that she felt that equality for people with disabilities was “breached” during the ceremony, in January, as she was placed in the stage sideroom with a sound engineer, buckets, mops, bins and furniture.

She said, though she was “proud” to be awarded her postgraduate degree in Posture, Seating and Wheelchair Mobility, she felt she was “shut away” and not part of the ceremony.

She said she felt “segregated, isolated and hidden” throughout the whole graduation ceremony.

The Wexford woman, who suffers from a neurodegenerative disease, said that since she contacted the university in relation to the matter she has not received an apology.

A UL spokesperson said that the university has notified Dr Kennedy that her complaint will be discussed at the UL ceremonies committee meeting, next week.

“There was no sense of disquiet or even unhappiness, or outrage that disabled students were always put backstage. Nor any statements to assert that this was to be changed, or handled better in the future,” she wrote in her complaint.

Dr Kennedy referenced the conferrings webpage on the UL website, which states that the Foundation Building — in which the UCH is based — has “international-standard access facilities for people with disabilities” and that they include wheelchair positions with companion seats in the auditorium.

“It is even more upsetting as I have a neurodegenerative disease, I was not born disabled. Such a situation makes me feel my degeneration. [It] reminds me that I am degenerating. It upsets me. It reminds me that in past years I would have been on stage, not backstage with the sound engineers. It [the ceremony] did not honour me.”

Dr Kennedy was accompanied by her twin sister Ann, who is also a wheelchair user. However, she said that she had to leave her wheelchair in the back room, in order to be able to sit down amongst the audience.

“Although I was told my twin sister could sit with me she would have missed the ‘drama’ of the graduation, watching and being amongst the ‘emotions’ of the happy participants and not able to take photographs, as I did.

“So it was, I sat alone amongst equipment. In a very jumbled, unaesthetic environment. It was not ‘special’,” she wrote.

Dr Kennedy did tell the Limerick Leader this week that staff “were extremely kind to me all throughout the ceremony”. However, she added that “all the kindness and attention given does not mean inclusion or equality of participation.

“Yes, staff members came to be with me before I went across the stage and was there when I returned. Yes, staff made sure I had water. I was told not to go out a little on stage to watch people come in as the mechanics were live streaming the event. My twin was told not to come across the stage to me, even though graduation had not yet commenced as they were live streaming.

“Yes, I was attended to, I was not alone, but I was not where I should have been. With either my family or fellow graduate student from my course. I was excluded from the fun and enjoyment in a visually unattractive space,” she wrote in her complaint.

Ms Kennedy added that her visual memory of the event is “brushes, sound equipment, engineers, and tracksuited personnel who came to me before and after I got my certificate”.

She said that the environment was not respectful and dignified after she had a “difficult year” of studying while suffering from an illness and disability.

“I was the isolated, non-participating disabled wheelchair user grad-uate, backstage. No one saw me except a few workmen. This is not disability equality. Nor is it professed as an ‘international standard of disability access’ by any stretch of the imagination.

“It is quite disgraceful. It is discrimination. It is disrespectful to the disabled person who has paid for a course, studied hard and achieved,” she said.

Ms Kennedy said that she was “very pleased” to be one of the first students to graduate from the course in which she studied, and that the course is “very important”.

She added that she does a lot of disability advocacy and campaigning for equality for people with disabilities. She told the Leader:

“I don’t like exclusion. I don’t want this to continue for others, and I want all people to be involved in the ceremonies. I want things to change.”

Ms Kennedy was also in correspondence with a lecturer, who claimed that when the University Concert Hall was built in the early 1990s, “it was a disaster” for any teaching staff with a disability.

The lecturer, who does not wish to be named, said that they did not have ground level access from the outside, and that even though they had a “very slow” chair lift from the back of auditorium, there was no access to the stage.

The person said that for the past 25 years, some lecturers or teaching staff with disabilities have been required to arrange a porter to assist them to open a stage door and come in via the backstage area, where Ms Kennedy was seated. The lecturer said that the porters “are always very helpful and obliging” for lecturers who are teaching a class.

“They never envisaged that a wheelchair user might be a lecturer. I often wonder what would happen if Stephen Hawking came. Would he have to go out in the rain to get to the stage?” the lecturer added.

A spokesperson for UL said that the UCH includes four wheelchair places in the centre of the hall to “provide optimum views of performances on stage”. Graduates are seated alphabetically and queue along the concert hall steps before going on stage, and that graduates who are wheelchair users queue at the stage “side-room”.

“All graduates have the same experience when crossing the stage in full view of assembled guests; all graduates are presented with their parchments across the mace by the UL president in the same manner.”

The spokesperson said the normal procedure for people who are unable to manage the steps join the conferring queue from the stage side room, which, they said, is “regularly used for graduates on crutches and also for graduates who use wheelchairs who are receiving awards”.