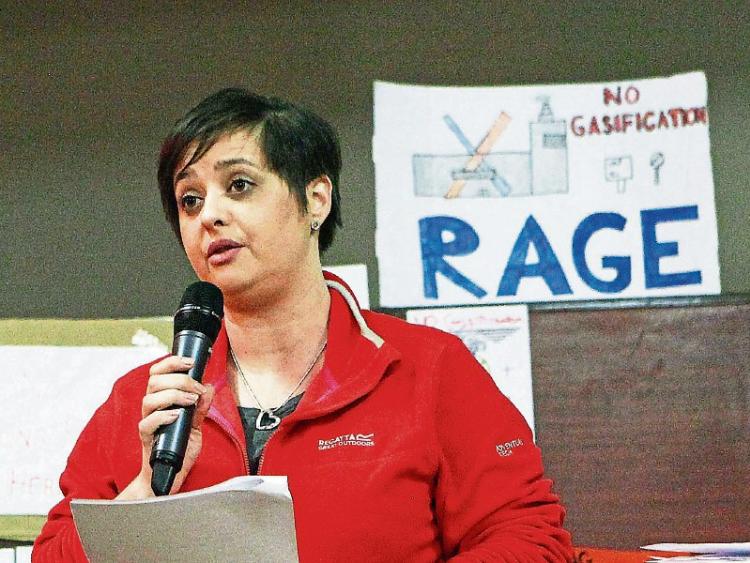 ‘No consultation’: Catherine Dowling, chairperson of RAGE, addresses the meeting

THERE were very few empty seats in Shanagolden hall last Thursday where over 550 people turned up to highlight their opposition to the proposed gasification plant in nearby Gortadroma.

Three seats that were vacant, however, were the ones reserved for Limerick City and County chief executive Conn Murray and his colleagues from the council’s environment department.

Catherine Dowling, chairperson of RAGE (Residents Against Gasification in our Environment) pointed out that they had been invited to attend but that Mr Murray had declined. In a letter to the group, he instead offered to meet separately with a delegation from the area.

But 11-year-old Darragh McMahon, a sixth class pupil in Kilcolman NS, had a message for the council.

He read out a letter he had written, outlining his fears for the future should the gasification plant go ahead.

“When Conn signed the lease, he turned all my friends, family and neighbours into his guinea pigs. He has the power to change this. All he needs to do is pay off the company. I hope he will listen to his conscience and do this,” said Darragh.

And his wasn’t the only message from the children of the area. The hall was festooned with posters designed by local national school pupils with messages like ‘No Killing Fields Here’, ‘Say No to Toxic Emissions’ and ‘Gasification will destroy our lives’.

Ms Dowling accused Limerick City and County Council of failing to adequately consult with the local community before signing the lease.

“There was no public consultation on this proposal for gasification, no discussion with the citizens regarding the pressure this plant would put on our infrastructure.”

She urged the local councillors who were at the meeting to listen to their pleas and vote to rescind the lease granted last May to Cadence EnviroPower to develop the waste-to-energy facility in Gortadroma.

“Conn Murray has no choice but to honour that vote,” she said.

Ms Dowling described the technology Cadence was proposing to use as “untried, untested, unproven and even patent pending”.

“My question is, are Limerick City and County Council signing a conditional lease or agreeing to go ahead and let this go to planning and allow Gortadroma to be a laboratory experiment for a US multinational,” she asked.

She also revealed that RAGE had enlisted the services of top legal firm Arthur Cox to help them fight the gasification proposal.

She warned: “For every step Cadence Enviropower or Limerick City and County Council take to put this through, we will be right there as a community pushing back to stop this going through.

“We need to stand strong and united and not be bullied, ignored or intimidated by any government department, either national or local,” she said.

The meeting was also addressed by Prof Vyvyan Howard, a respected toxico-pathologist and prominent opponent of gasification.

His talk focussed on the danger to public health from incinerator emissions. He pointed out that, under European regulations, there was no distinction between gasification and incineration.

He also dismissed the company’s claim that it would be using proven technology, describing it as being at a “development/experimental stage”.

Among the claims made by Prof Howard was that the toxicity of the ultrafine particles emitted by incinerators had never been studied in detail.

But he added: “It is widely accepted by anybody who works in air quality and health that exposure to particles damages you.”

“There is no safe level of exposure.”

He described the process being proposed as a “fail dangerous technology", warning that the potential risk of something going wrong was very high, particularly given the fact that it is intended to operate using municipal waste which would contain a very diverse mix of materials.

He raised questions too over the safety of the waste that would be left over after the process. Cadence have claimed that the final amount of waste coming from the facility would be just 5% of the volume of waste going in.

This waste product would be chemically inert and could be use as a filler material for construction, according to the company.

However, Prof Howard dismissed the claim that this ash would be safe, pointing out that it can contain many times more dioxins than would be released to the air.

He also questioned the wisdom of entering into a 30-year contract with the company. “You are going to miss out on a lot of modern progress on how to deal with waste, mainly reduction of waste, but the contract will make you keep paying regardless of whether you can produce the waste or not.”

“Incineration is an end-of-pipe technology. It encourages the status quo and it gets in the way of doing sensible things which are reduction, reuse, recycling, educating all of us in doing the best solution for our local environment and for the planet,” he added.

The meeting was also addressed by Cllr Richard O’Donoghue, cathaoirleach of the Adare Rathkeale municipal district. He said he regretted having voted last March to grant the lease.

And he claimed that the council staff who briefed councillors on the project were not qualified to do so. “This lease should be revoked,” he said.

The Irish Farmers Association also pledged its support to the anti-gasification campaign.

Its representative, Sean Lavery, said it should be a condition of planning, that a “multi-million euro” bond be put in place by the company to cover the cost of clean up should anything go wrong.

Meanwhile, a spokesperson for Limerick City and County Council has pointed out that while the council had entered into a conditional lease with Cadence, the company would have to satisfy the planning and licencing process before the project could go ahead.

If the project were to proceed, Cadence would pay the council €4m per year in rent, as well as a contribution of €100,000 per year to a community fund. It could also create 160 jobs, according to the company.