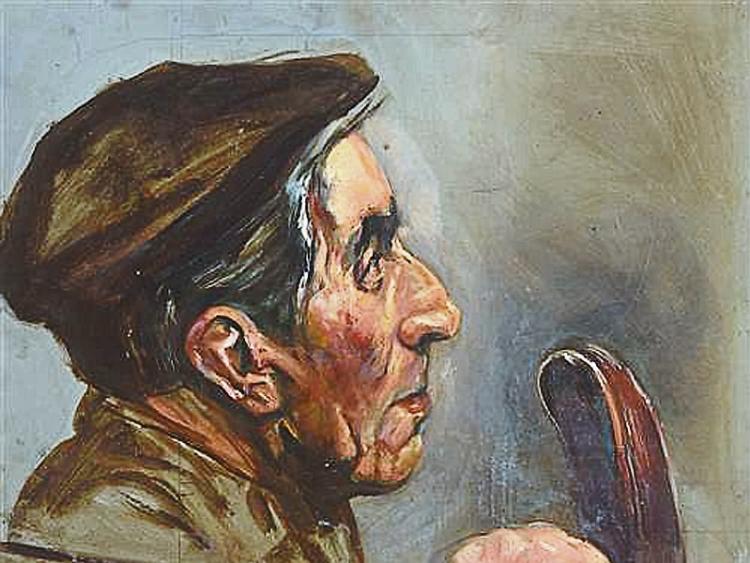 Sean Keating’s A Study of Dustman Reilly for the Key Men, which is expected to sell for at least €15,000 at Whyte’s

PAINTINGS and illustrations produced by iconic Limerick artist Sean Keating will go under the hammer at Whyte’s auction next week, with a total estimated value of up to €36,500.

Of the three pieces to be sold at Ballsbridge on February 29, two of them are charcoal sketches of Éamon de Valera; one valued up to €2,000 and one at €4,500.

Keating, who was honoured Freeman of Limerick City in 1948, was a member of the Royal Hibernian Academy and was an active, influential artist since 1915. In 1950, he was made president of the RHA.

The two illustrations were the basis of a watercolour study by Keating, and were included in the Limerick city artist’s retrospective showcase in the Municipal Gallery, in Dublin, in 1963.

The two sketches were purchased directly from the RHA artist by Nobel prize-winning astrophysicist Erwin Schrödinger, in 1956.

As of Wednesday afternoon, zero bids had been made on all three of Keating’s works. The starting bid for the two sketches are €1,125 and €2,625, and each painting has been viewed by hundreds of people online.

The three paintings will be sold, as part of the Irish and International Art showcase, next Monday.

In 1939, the Limerickman attended the prestigious World Fair in New York, and was awarded first prize for a painting.