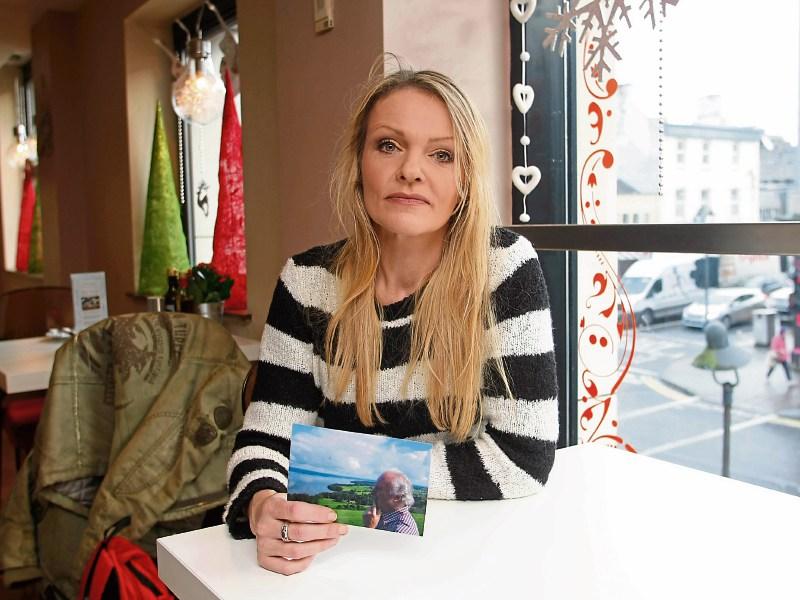 Joanne Moloney with a picture of her father Eddie, who died after waiting on a trolley for 12 hours Picture: Press 22

UNIVERSITY Hospital Limerick became a talking point of a controversial RTÉ investigation earlier this week, as it looked at the “horrendous” conditions, in which patients are admitted to Irish emergency departments.

The Big Picture programme, entitled Health: The Never Ending Story, observed a number of hospital A&Es around the country.

The report first looked at a case study of an elderly man, Eddie Moloney, who died after suffering a stroke, but was left on a trolley in the Dooradoyle emergency department for more than 12 hours, before getting access to a bed the following morning.

Daughter Joanne Moloney told RTÉ that her father, who lived in the city, was admitted to the A&E on a Friday night, in early October. She said that after a brain scan, “that’s when we knew that our father wouldn’t be waking up ever again.

“It was chaos. It was a Friday night,” she said. “There was a lot of drunk people on trolleys. There was a drunk man, right beside my father, and he was so drunk that when he tried to get up, he fell off the trolley and banged into my mother, while she was trying to rub my dad’s hand and talk to him. I was devastated for my mum and the distress that she was in.”

She said on the programme that when they — Joanne, her brother Paul and mother — asked staff if they could access a private room for their dying father, the request was declined.

“They had said that he wasn’t going to make it through the night, so my thinking was that he was put out in the hall to die. Again, it’s not the staff’s fault,” Paul said.

Eddie, aged 73, who was former owner of Buddy’s Bar on William Street, survived the 12 hours and was transferred to a bed. However, that morning he died in “busy public ward, with little or no privacy”.

Paul said: “No one who goes through their whole life working should go through that at the end of their life. Take care of these situations first before you take care of anything else in this country. The health service is at the top of the list, surely.”

RTÉ went undercover in the emergency department, at UHL, where there were 37 patients waiting to be transferred to a bed on the day. During their secret family, they spoke to local woman Niamh Galligan, whose mother — in her 80s — had been lying on a trolley for two days.

An emotional Ms Galligan said that there was a lot of activity in the emergency department and that “you can’t sleep or rest” there.

"People are in pain; they are moaning, they are groaning. So, in that, she finds it very uncomfortable. There are so many trolleys lined up, and it’s not that the staff don’t care; they do care, but they are working in horrendous conditions. The elders have built this State and it’s terrible that they are left like dogs. Like dogs. It’s horrendous that anybody should be left like that. It’s terrible, and my heart goes out to those people.”

However, the spokesperson added that in a “busy hospital environment where are there competing demands for single rooms, this is not always possible”.

An End-of-Life care section is built into the bed-booking system to facilitate patients.

The spokesperson said that the hospital apologises to “any any patient who has faced long waits during this busy period and is making every effort to minimise the numbers waiting and the length of time they wait.

“UL Hospitals Group has long acknowledged that the emergency department at UHL is simply too small for the volumes of patients attending and is not fit-for-purpose.”

The spokesperson said, in spite of measures taken to reduce the hospital’s overcrowding rate in recent months, the emergency department has “remained under pressure since December 2015 owing to the high volumes of patients presenting, in particular frail elderly patients, and seasonal factors such as influenza”.

Amongst these measures include increasing bed capacity by more than 40 in the past two months; hiring of additional staff; securing funding to open a specialist facility for elderly patients at St John’s Hospital; and closer cooperation with the Community Health Organisation.