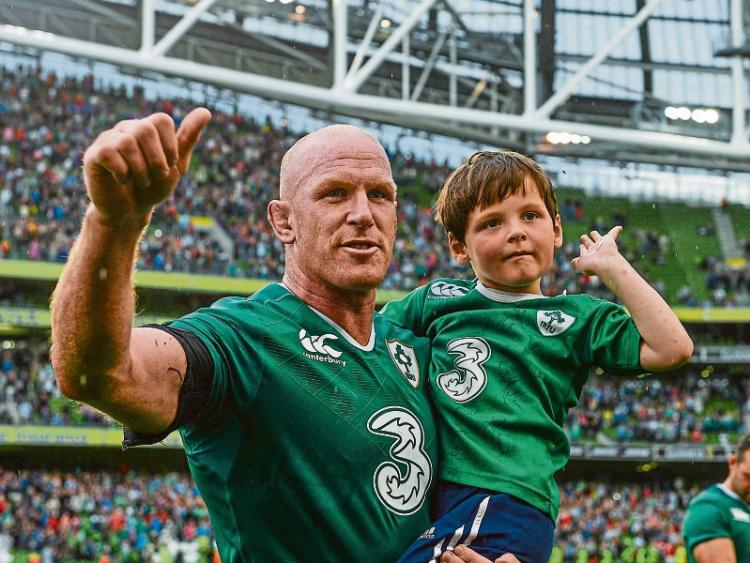 HIS DAYS as a professional rugby player are over, but Irish and Munster legend Paul O’Connell is still mulling over his future career.

Speaking on Live 95FM, the 36-year-old, who was forced to retire due to the injury sustained in the World Cup last year, said he has been spending the last few weeks thanking all his fans for their messages of support and is endeavouring to reply to everyone.

“Someone wrote me a letter and said ‘Stop saying you’re retiring, say you’re changing career’, and that’s what I’m doing.

“The injury I got in the World Cup was just one injury too far for me. While I’ll be fine, I just won’t be fine for tackling 18 stone rugby players any more. I should be able to play a bit of five-a-side and golf, but it was unfortunate.”

His injuries also put an end to his dream of playing with the French rugby team Toulon, and it was an adventure the whole family had been looking forward to. He and his five-year-old son Paddy had also been taking French language classes at the Alliance Francaise de Limerick in Pery Square.

“We had an exciting adventure ahead of us going to Toulon. I’ve been down there a few times, and there are some amazing players there, but unfortunately it’s not going to happen and I’ve to move on to the next thing now. Everyone was looking forward to it, but that’s life you know. You can’t get too upset over something you’ve no control over. You just have to move on, and unfortunately the injury isn’t going to come as right as we’d hoped, so you just had to make that decision, make the call, and move on.

Asked about his quelques mots en francais, he said: “We were doing them [the classes] up in Alliance Francaise up in Pery Square. We weren’t in the same class now. They were really enjoyable, he liked them and we had a great teacher up there, who was a Toulouse supporter and would wear his Toulouse hat when he came in. We’ll probably kick them off again with them [the Alliance] , but yes, it’s unfortunate.”

In terms of reflecting on his hugely successful career, he said: “I wouldn’t be one for looking back a whole lot anyway. I certainly haven’t done it in the last few weeks anyway. People have been very nice to me in the last few weeks, with letters and text messages and emails and phonecalls, that’s what I’ve been doing for the last few weeks, is trying to reply to as many of those as I can. I probably wasn’t always as diligent in doing that when I was playing because I always felt I had an excuse when I was training and people would understand. But this week I was really conscious in trying to reply to everyone and I’m nearly there now I think.

“I don’t look back much, but obviously when I look back you look at the trophies you won, the craic we had was a big part of it and that’s probably what made us good in Munster and in Ireland as well.

“It was incredibly enjoyable – it was hard at times, hard training, some of the losses are days I’ll never forget either, but ultimately it was just brilliant craic, with the fans, with the players. To think this was my full-time job for 14, 15 years, I just hope whatever I end up doing will be as much fun,” he told radio host Joe Nash.

After appearing as a pundit on the BBC recently, O’Connell said he “always wondered about TV work, and why guys did it at times. But it was incredibly enjoyable and I enjoyed it a lot more than I thought I would. I think coaching is a very tough job, especially if you have young kids, you’ve a game on Saturday, win lose or draw you’ve a meeting on Monday, and that sets the tone for the rest of the week. It’s a seven-day a week job and a really tough job.”

As a player you have to take the Sunday after a game off, you might go to the pool and do a few stretches. But you need a bit of time off to be mentally and physically ready, and rest on a Friday before a game. There is no comparison really between coaching and playing in terms of the time put in. I think if you think you’re a good player, a good captain and an on-field leader that being a coach would be easy, that’s bit of a leap