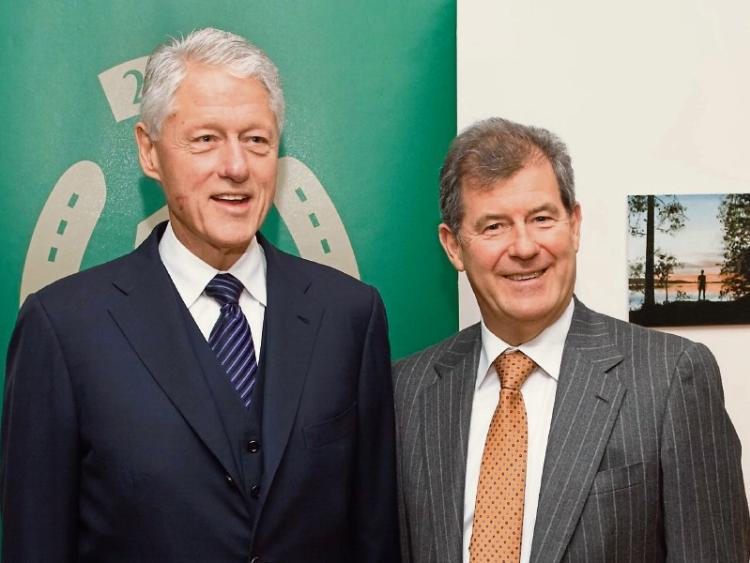 JP McManus with Bill Clinton at the Limerick's scholarship awards

THE COUNCILLORS of the Cappamore/Kilmallock municipal district are to bestow the highest honour they can on JP McManus.

A civic reception, proposed by Cllr Bill O’Donnell, was seconded by Cllr Gerald Mitchell and unanimously backed by their colleagues.

It was agreed that the council chamber at Áras Mainchín Seoige in Kilmallock would be named the JP McManus meeting room, and that an appropriate plaque would be put in place and unveiled on the day of the reception. He will also be presented with a scroll of honour. The date has yet to be finalised but it is expected to be in early March.

He said it is the first time they have given permanent recognition to somebody since the district was formed.

Mr O’Donnell said Mr McManus is “one of our own”.

“The family is living in the area. His contribution over a long number of years has been enormous. Through Martinstown Stud he has given significant employment. He has always shown a great interest in local affairs,” said Mr O’Donnell.

The Bruff man said the JP McManus Benevolent Fund has contributed to many charities, community groups and projects in the area.

“I would be very aware of the contribution he has made to charitable organisations and, in particular, St Joseph’s Foundation. My family are involved in St Joseph’s.

“I think his contribution to St Joseph’s is particularly recognised by the people of the area. His daughter Sue Ann Foley heads up the benevolent fund and is carrying on his good works,” said Mr O’Donnell.

”This is just another example. TLC has been a very significant development in our county and I look forward to this year’s event. I have no doubt it will be as successful as last year’s,” said Mr O’Donnell.

The county councillor said they are “absolutely delighted” that JP McManus has agreed to accept the honour.

”Mr McManus has been recognised  throughout  the world and, indeed, by our own city and county council so it is only fitting that we recognise him at a local level,” he concluded.

He will surely go down as the only man to have a council room named after himself and a council hall called after his famous horse Istabraq.