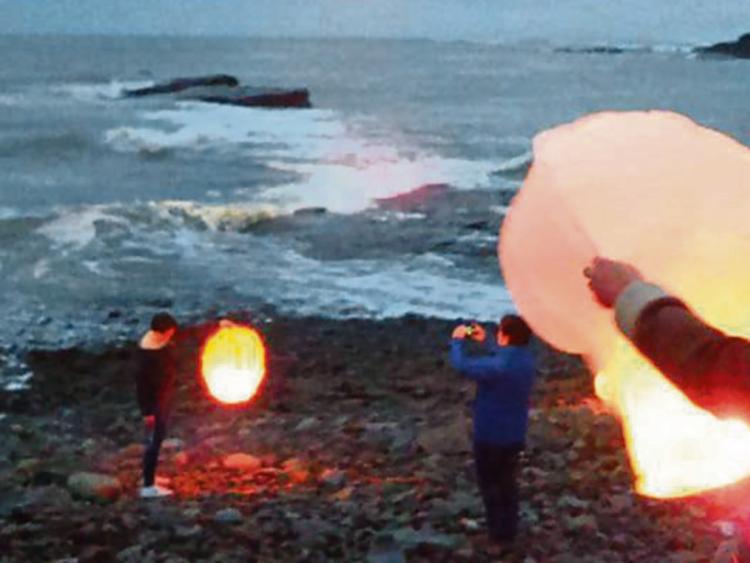 Lanterns were released into the sky at Spanish Point in Jason’s memory, on what would have been his 40th birthday

THE FAMILY of the late Limerickman Jason Corbett gathered at the weekend in a symbolic ceremony to remember him on what would have been his 40th birthday – which he shares with his twin brother, Wayne.

The Janesboro man and 39-year-old father of two was killed in August 2 last in his home in North Carolina. His second wife, Molly Martens Corbett, 32, and her father Thomas Martens, 65, a former FBI agent, have pleaded not guilty to his second degree murder and involuntary manslaughter. They are due back before the court again in April.

Away from the courtroom, thoughts of Jason intensified on Friday last, February 12.

In a show of solidarity, his family and friends gathered on the beach in Spanish Point, one of Jason’s favourite places and released lanterns into the sky at dusk in his memory.

Candles were lit and prayers were said in the nearby Star of the Sea church in Quilty, where Jason wed his beloved first wife Mags, who passed away tragically following an asthma attack.

Tracey Lynch, Jason’s heartbroken sister and now guardian of his two children, Jack and Sarah, alongside her husband David, said it was important for them that they all gathered in Jason’s “very special place”.

“So many memories were made here, a life was planned, holidays, birthdays, births, New Years were celebrated and welcomed. But the memories cannot take the place of you today. They are simply not enough. To you Jason, you were just an awesome brother,” she said.

His friends, behind the Bring Justice for Jason page, wrote: “Today we think of Jason's children, his family and friends, as they mark this first birthday without Jason. But we are especially thinking of Wayne, his twin, whose loss of Jason will be felt most intensely on this day.

“To lose a spouse is a tragedy, to lose a child perhaps the greatest tragedy most of us could ever imagine; but everyone had an identity before becoming a spouse or a parent. A twin is never anything but a twin, from conception until death.

“In the most intimate of bereavements, the surviving twin will find the foundation of their own identity forever changed because twinhood bestows the singular oddity of a plural identity. Tonight we will raise a toast for all that they shared, but we will never forget all that is lost.”

The trial in the US is expected to be held this year. At the most recent court hearing, the killing of the Limerickman and father of two was described as “heinous, atrocious and cruel”, by the district attorney.

Both defendants were earlier granted bail on a  $200,000 (€185,000) bond. Jason died from head injuries allegedly inflicted with a baseball bat and paving stone following what authorities described at that time as a domestic disturbance. Copies of Mr Martens’ personnel file from the FBI have been requested, and Judge Mark Klass granted the order, which obliges the FBI to disclose the file.