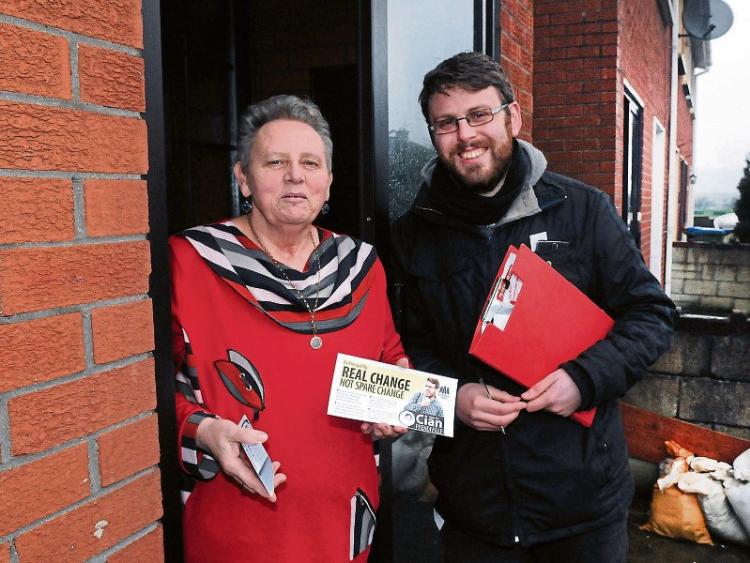 Cllr Cian Prendiville, out on the canvass with Carmel Carmody, Island Road

The northside councilor believes both Labour Education Minister Jan O’Sullivan and Fine Gael TD Kieran O’Donnell could lose their seat, with the AAA to benefit from one.

He said: “Based on national polling, as well as on the experience of our own campaign, it is clear that the government parties are in big trouble in Limerick City. The latest poll has Fine Gael on 28%, which is some distance from what they would need to keep 2 seats.

"Labour are on 8% which is far from sufficient to keep Jan O'Sullivan's seat. According to the same poll, ‘Independents/Others’ are on 26%, which equals more than a quota for a seat in Limerick City. This puts us in contention to take either Jan O'Sullivan or one of Fine Gael's seats."

Cllr Prendiville says he has Ms O’Sullivan’s seat firmly in his sights, adding 'old Labour’ areas are “repulsed” by the minister’s betrayal, and are switching to his party in big numbers.

”Countless supporters of the late Jim Kemmy are switching to the AAA. Kemmy famously resigned from government over an unfair tax on children's shoes. Jan O'Sullivan has sat in a Cabinet which has presided over much worse, and not a peep out of her," he said.

”Our role in building the anti-water charges movement and boycott has catapulted us into contention for a seat. Electing a TD from the anti-water charges movement would be the beginning of a political revolution in Limerick to clear out the political cobwebs, and see the city take its rightful place in the front line of the national struggle to change politics and build a new movement for working class people,” he concluded.

In response, Ms O’Sullivan declined to comment directly on Cllr Prendiville’s claims, saying: “I think people will make their own assessment”.

”But he talks about the working class areas. I don’t know if he is aware, but for decades I have been running weekly advice clinics in Moyross, Southill, St Mary’s Park, Garryowen, Kileely, and my own office which is close to the Hyde Road area,” she said.