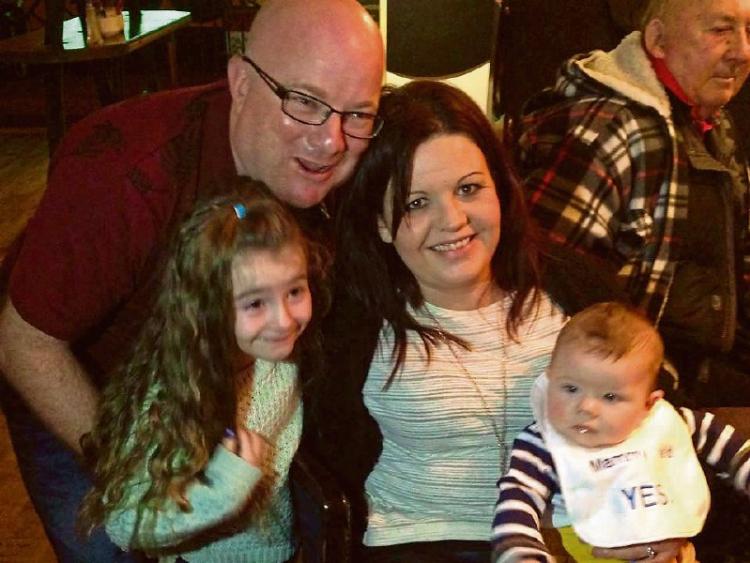 Mandy, Ollie, baby Bobby and Emily-Rose moments after the proposal

A LIMERICKMAN who was sick with nerves about asking the love of his life to marry him, enlisted the help of his baby boy for the big moment – he used his bib to spell out his sweet marriage proposal!

Ollie Manning of Effin, Kilmallock was so consumed by nerves about proposing to his girlfriend of 13 years, Mandy Fogarty, that he decided his six-month old son Bobby was the man for the job.

“I was very nervous and kept thinking ‘how am I going to ask her’ so I said ‘Bobby can do it!’” Ollie revealed this week.

He also enlisted the help of local craftswoman woman Marcella O’Mahony and through private messages on Facebook arranged for two bibs to be embroidered.

The next step was picking the perfect moment for the proposal.

Mandy, who hails from Clonmel, organised a surprise 40th birthday party for Ollie on Saturday night at Fitzgerald’s Bar in Kilmallock.The next day they returned for lunch.

“I said I would do it with everyone around. I was shaking. My stomach was sick all morning,” said Ollie.

“At first I was thinking, ‘Will I just do it now to get it over with and enjoy my dinner’ but everyone was chatting so I said I would wait.”

Young Bobby was becoming restless so Ollie decided to take him for a walk around the pub to keep him occupied.

When they returned, Mandy noticed something different about the tot.

“When I brought Bobby out that day he was wearing a white dribbler and then when he came back with Ollie he had a blue dribbler on. I said ‘where did he get that dribbler?’ and Ollie said; ‘Mandy, Bobby wants you’.”

Bobby was in Ollie’s arms. Mandy could just about make out the words Mammy and Daddy on the bib. “But I couldn’t see what was written in between.”

Ollie straightened out the bib to reveal the full text, ‘Mammy Will You Marry Daddy?’

“I put my face in my hands. When I put my head up, there was a sea of people around me. I was stunned but thrilled.

“He got down on one knee then with the ring – a beautiful trilogy-style ring in white gold.”

But Ollie wasn’t finished yet. When Mandy said yes, he pulled a different bib out of his pocket which read ‘Mammy Said Yes’ and put it on Bobby.

“The poor child hadn’t a clue what was going on, God love him,” smiled Mandy.

The couple have known each other for 16 years and have been dating for the past 13 years.

“When I saw her first my mother was in the car. I said to my mother; ‘She’s a fine looking girl, isn’t she?' and my mother said; 'She is son!' so I had my mother’s approval,” Ollie said of his late mum Mary.

The couple have three children - Dean, 18, Emily-Rose, 7 and baby Bobby.

While last Sunday was a magical moment for the family, they have endured their own difficult times – the couple had a stillborn baby in 2004 named Josh. Young Emily-Rose meanwhile, suffers with arthritis but thankfully is enjoying good health at the moment.

Because they got engaged on Ollie’s 40th, the couple are planning on getting married on Mandy's 40th in March 2018."I want Bobby to be old enough to play a part. He did play a big part in the engagement after all,” smiled his chuffed mum.