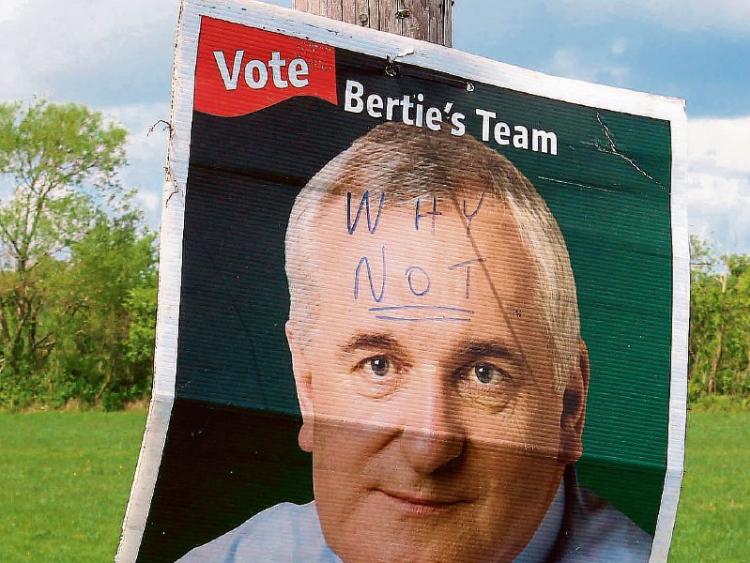 The infamous Bertie poster has gotten another airing

A GHOST of elections past has reappeared on the Limerick to Cork road forcing motorists to do a double take.

A poster of former Taoiseach Bertie Ahern has mysteriously re-appeared on a pole on the busy N20 near O’Rourke’s Cross, Bruree.

The poster last made an appearance on the route in May 2014, ahead of the local elections.

The poster, which features a beatific-looking Bertie, has been nailed on the pole with a piece of timber.

It urges the electorate to ‘Vote Bertie’s Team’.

“It’s a bit of skit. Somebody has put it up I suppose to remind people of the hard times,” said general election candidate Cllr Richard O’Donoghue.

“I remember when it appeared that last time somebody asked me to take it down and I said ‘I will take down nothing. Whoever puts up something can take it down themselves’.”

The former Taoiseach hasn’t graced an election campaign poster since 2007 when he successfully contested the general election.

The Fianna Fail slogan at that time - which has been ripped off of the bottom of the O’Rourke’s Cross poster - was Now, the next steps. In 2010, the Former Fianna Fáil TD confirmed that he would not be contesting the next general election which took place the following year.

Meanwhile, Cllr Richard O’Donoghue who hails from nearby Ballingarry has given some indication of the amount of road covered by election candidates on a daily basis.

“I walked 14 kilometres on Sunday between 10am until 8pm that evening,” said the councillor who is running as an Independent.

“Not only I covered that but the 20 canvassers I had with me did so as well.  I had a tracker on me.  The thing I discovered is when we went into an estate we could do 50 houses in an hour but if you were to do 50 houses in the county it could take you a day.”

“ I don’t ring a bell after eight o’clock because if people have children in bed, you just tap on the door.”