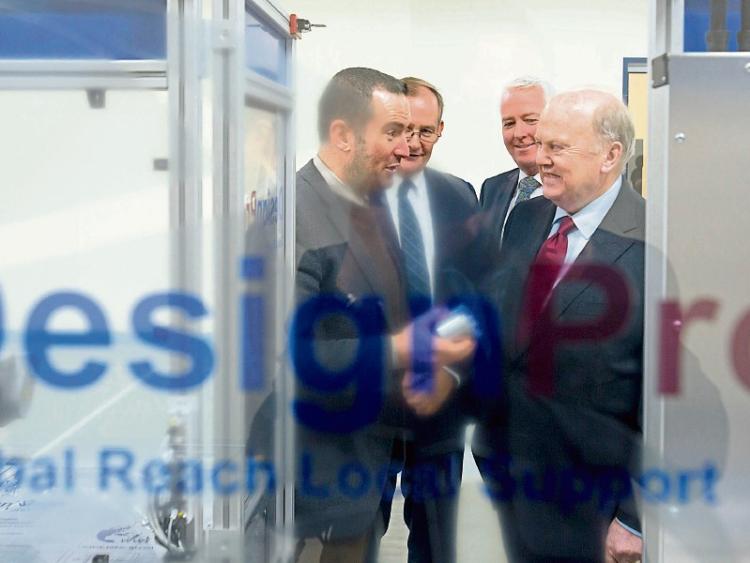 Finance minister Michael Noonan with Paul Collins at DesignPro, at the recent opening of the facility. Hopes are high for more good news for the west of the county

SPECULATION is running high in Newcastle West that a new industry for the town will be announced shortly.

It is expected that a pharmaceutical company will soon announce its intention of setting up a manufacturing plant in the town with the creation of 150 jobs.

The company, it is understood, will be located in an advance factory built under a BES scheme in the town’s industrial park.

However, those closest to the project were reluctant to speak openly about the project this week.

It is understood however that an announcement is imminent.

Sources have told the Limerick Leader that a lot of background work has gone into this project over the past two to three years.

But there is also a certain wariness because an announcement about the project has been expected for some time.

The new plant, if and when it comes on stream, will be warmly welcomed in an area which has seen little or no foreign direct investment for the past 20 years or more.

Most of the new jobs that have been created in West Limerick in that time have come from local businesses or from non-national businesses that were well established in the area.

There have also been job losses in Pallas Foods.

Job losses in construction during the recession and the closure of Dell also hit hard and many small shops and businesses as well as pubs have also closed with further job losses.

However, hopes are now rising that this is slowly changing. ProDesign, which has relocated to the former Andersen plant, expects to expand from 25 to over 80 in the years ahead while the new CPL Fuels plant in Foynes is expected to generate up to 140 jobs.

Bord na Móna also has plans to develop a smokeless fuel plant in Foynes with up to 90 new jobs while the controversial gasification plant at Gortadroma could generate over 100 jobs.