Paul O'Connell a 'leader on and off the pitch' 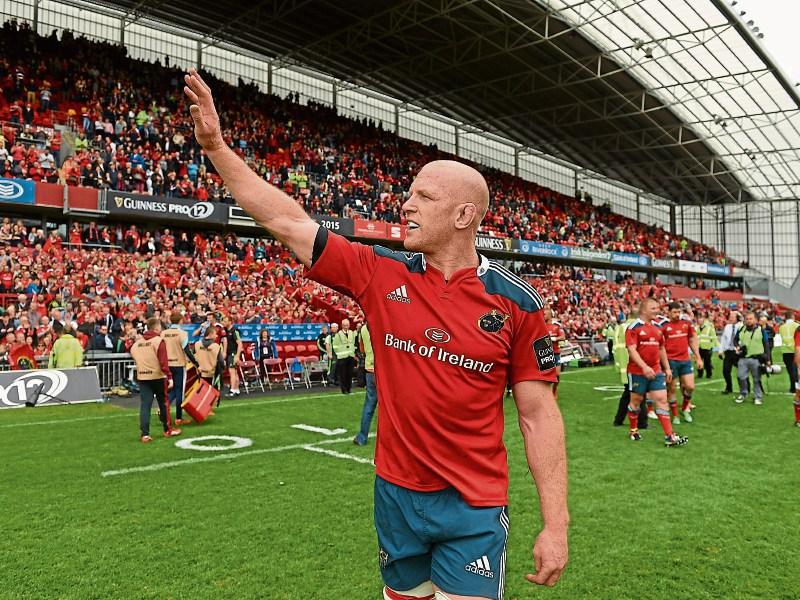 PAUL O’Connell has said he will “take a bigger part” in the initiatives he is involved with in his native Limerick, having been forced to retire from rugby.

Considering the weight the legendary rugby player has thrown behind initiatives like the Team Limerick Clean-up and City of Culture, it is hard to imagine him giving more of himself.

However, owing to his announcement this Tuesday that he is to retire from rugby and will not play for Toulon due to the now career ending injury he suffered against France at the Rugby World Cup in October, the Limerick man will have time to work out what he wants to do next.

Asked about that by Michael Corcoran of RTE, he said: “I have a number of things on the go at the moment. I am doing a book which I will have to start working very hard at now. I work with a few companies.

“I am involved with quite a few initiatives around Limerick which I'll be taking a bigger part in now as well. I will have a look at coaching as well,” he said, adding that it would be “long few years down the line”, if he was ever to do anything with his beloved Munster.

Despite spending “about four and a half hours a day” working on his injury, it was not to recover, and Paul said that it was with "deep regret that I have decided to retire from professional rugby following medical advice”.

"Once the decision was made, once I realised it in my head, it wasn't difficult. I was disappointed, but I think you can only be disappointed about things that you can do differently. I don't think there was anything else I could have done, so you just have to start moving forward," he said, noting that he would not be "taking on the big adventure in Toulon".

Tributes were quick to flow on social media, with Ronan O'Gara hailing him as “the pride of Limerick and a role model for the rest of the country”.

“Something beautiful and fitting the great man retires as a one club man,” he wrote.

Munster Rugby hailed a “magnificent and trailblazing career”, while Today FM broadcaster Matt Cooper said “he went out at the top, one of the best ever, playing at his best in beating France at RWC 15”.

Paul said he had been “blessed to be a professional rugby player for over 14 years and to be part of Munster and Ireland teams that have experienced success.

“I have played with some of the best players to ever line out in the red of Munster and the green of Ireland and have had the privilege of captaining my country. I would like to thank those who have supported me over the course of my playing career,” he added.

Mayor of Limerick City and County, Cllr Liam Galvin, said the rugby player had "proven himself to be a leader on and off the pitch".

"Paul has represented Limerick on the national and international stage with distinction. The high regard in which he is held locally is exemplified by the fact that he became only the third person to receive the Freedom of Limerick following Sir Terry Wogan and Thomas Ryan RHA," he said.

"Paul has always made himself available and taken time out of busy schedule to support his native city and county. Team Limerick Cleanup and Limerick's bid to secure 2020 European Capital of Culture designation are just some examples of the initiatives he has supported locally.

"I have no doubt he will continue to be a proud and important ambassador for Limerick in years to come just as he has been on the rugby field throughout his long and illustrious career. I wish Paul the very best for the future," he added.