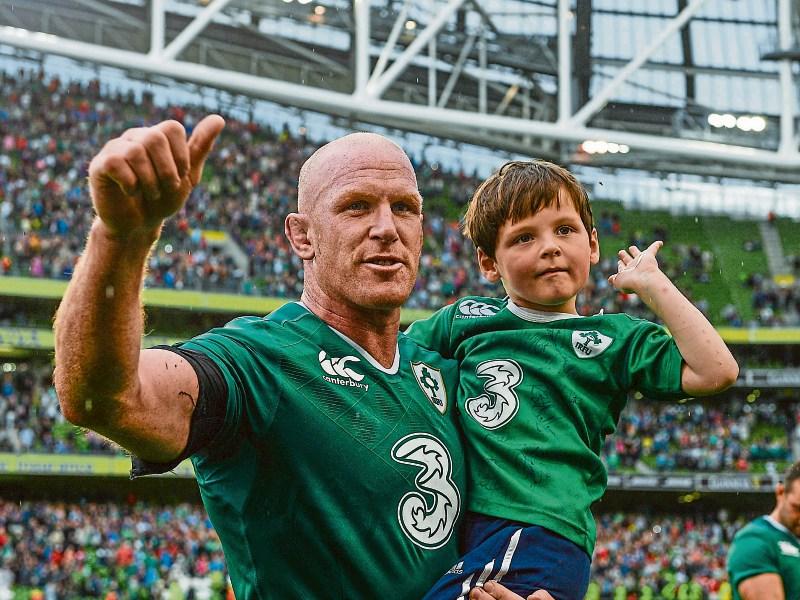 Paul O'Connell with his son Paddy at the Aviva Stadium Picture: Brendan Moran/Sportsfile

THE cerebral Paul O’Connell said he would have “no regrets” at leaving his home city and country for the swansong of his glorious career.

The towering rugby legend has this Tuesday morning announced he is to retire from rugby and will not play for Toulon due to the now career ending injury he suffered against France at the Rugby World Cup in October.

He had told the Limerick Leader in November that he would “definitely look at all the Munster and Irish games with envy of the players still playing there, but it won’t be with regret” when he left for the Cote D’Azur.

“I did as much as I could when I played. I enjoyed myself incredibly, played with some great players and great coaches, but when the time comes to move on, you have to move on and you have got to make the most of where you are going. I am really looking forward to going to Toulon and playing with some terrific players.

“It will hurt but I have made the decision – once you make a decision you have got to get busy at making it the right one. That is what I have done, I have elected to go away, do something different, move to France with Emily and the kids and I am just looking forward to all the experiences and all the knowledge that that is going to bring me.”

He has had extensive rehab on the injury – a hamstring ripped from the bone – and it was believed that he was making a good recovery, with his old team mate Ronan O’Gara suggesting recently that he expected to see O’Connell line out for Toulon in the European Champions Cup knock out stages.

But it is not to be and Paul has said in a statement this morning that it is with “deep regret that I have decided to retire from professional rugby following medical advice.

“I would like to take this opportunity to thank all at Rugby Club Toulonnais for their understanding and support over the past few months.

“Since sustaining the injury at the World Cup I have been fully focused on returning to fitness and starting an exciting new chapter for both myself and my family in Toulon. Unfortunately this will no longer be possible.

“I have been blessed to be a professional rugby player for over 14 years and to be part of Munster and Ireland teams that have experienced success.

“I have played with some of the best players to ever line out in the red of Munster and the green of Ireland and have had the privilege of captaining my country.

“I would like to thank those at Young Munster RFC, Munster Rugby, the IRFU and Lions Rugby who have supported me over the course of my playing career. Special thanks must go to my wife Emily for her unwavering support through the good and the bad and to my parents Michael and Shelagh.

“Lastly I would like to thank everyone who has supported the teams I have been a part of. The support you have shown me is humbling and an immense source of pride for both myself and my family.”

There has been a typically huge reaction on Twitter to the great man’s retirement, with many voicing their appreciation for Paul’s mighty career, one that encompassed a Grand Slam, Heineken Cups, Lions’ tours and 13 glorious years in an Irish jersey.

Paul O’Connell has announced his retirement from rugby. #ThanksPaulie for a magnificent & trailblazing career! pic.twitter.com/C1yxiWU4uA

Best wishes to Paul O'Connell in his retirement from rugby. Legend of the game. #paulie https://t.co/2Dt864LK9b pic.twitter.com/dn4G10GBQJ

Paul O'Connell's career ended by injury but he went out at the top, one of the best ever, playing at his best in beating France at Rwc15.