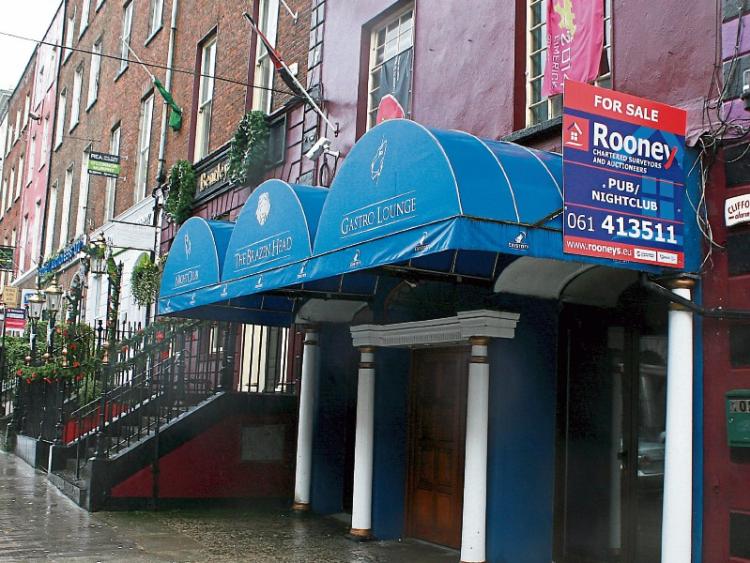 Under the hammer: The Brazen Head in Limerick city

ONE of Limerick city’s best known nightspots, the Brazen Head - home to Ted’s nightclub - could be set for a new lease of life, as it goes up for auction for a mere €380,000.

The property was previously listed for sale for €550,000 just over a year ago, but it will now be up for auction at Allsop's first 'private' auction in Dublin.

Allsop have just launched Allsop Private, a new platform specifically designed for higher value commercial and investment assets, valued at over €250,000. The legendary Limerick bar has a reserve of €380,000 to €420,000, and will go under the hammer on March 9 next. That auction will feature some 30 lots nationwide, each with six-figure sums, and a combined reserve of €18m.

Another Limerick property which will be up for sale on that day is the site of the former ACC ban at 17/19 Patrick Street, which has a reserve of €695,000 to €755,000. Its total floor area is 11,885 sq ft. The corner office building is arranged over basement, ground, and four upper floors.

The famed nightclub, which was frequented by Johnny Depp, Richard Branson and other stars who came to Limerick over its storied history, has been closed for some time.

It first opened in 1947, and has been one of Limerick's most popular locations until its closure a few years ago. The property includes a restaurant, bar, lounge, kitchen, nightclub, cold room, stores and toilets. It was previously up for sale through Rooneys auctioneers in the city in December 2014.

The complex underwent a major refit in mid-2012, reopening after being closed for two years. Extensive building works, including the addition of a kitchen, took place.

“Everyone has some sort of a connection to the good old days of Ted’s and the Brazen Head and I think it would be fantastic for Limerick for someone to get their hands on it and reinvent it,” auctioneer Gordon Kearney said previously.

The complex initially closed in 2004 after three decades in business and had opened sporadically before the refurbishment and reopening in 2012 - the year that marked 75th year of the Brazen Head’s location on O’Connell Street.

“It is 75 years this year since the Brazen Head opened on O’Connell Street, they moved the stone from John’s Street up to the wall outside the complex in 1947.”