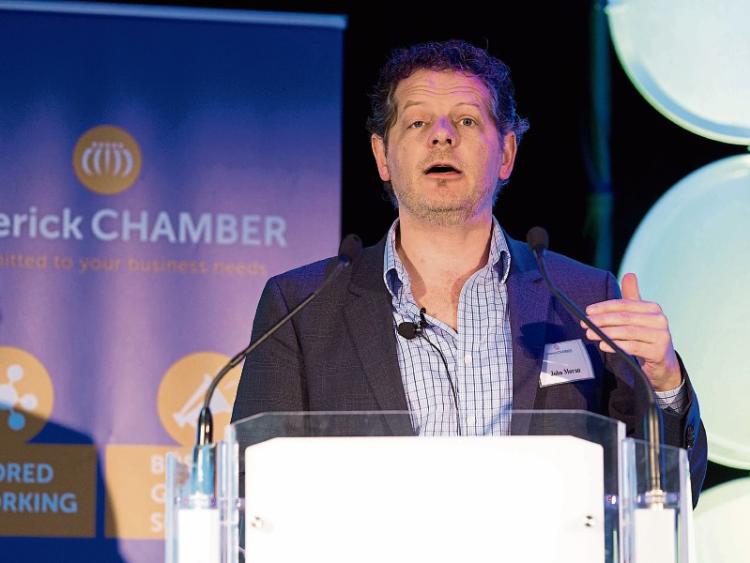 John Moran, who sits on the Limerick Economic Forum, at the conference in Thomond Park Picture: Sean Curtin/Fusionshooters

LIMERICK has a golden opportunity to become Ireland’s second major city – but to achieve this, a dramatic change is needed in how people see their way of living.

That’s according to the former secretary general of the Department of Finance, the respected John Moran, who also warned that a failure to seize this opportunity could see Limerick “fade away as a rural regional town”.

Mr Moran, who sits on the Limerick Economic Forum, was the introductory speaker at the Chamber’s first ever Business Strategy Conference held in Thomond Park.

The Mungret native believes that in order to attract the best of the best, Limerick’s surrounding area needs to possibly risk losing out on rural subsidies in order to become more urbanised.

He said: “Today’s millennials are turning their back on the suburbs and on the countryside, and want to live like Sex and the City, in urban spaces, where everything is walking distance away. The question I want to pose is: are we going to be brave enough in the Mid-West to meet their demands, even if it means restricted subsidies for what I call ‘rural Ireland’? Is the Mid-West ready to embrace all that might mean? Do we want to expand as an urban engine of growth, or fade away as a rural regional town?”

He warned that as a nation, Ireland needs to “give up facilitating and encouraging a rural living pattern” and concentrate on one, or two big cities “to become global centres of economic growth”.

Other speakers at the conference – including Virgin Media CEO Tony Hanway – have said Limerick is well positioned to become a counterpoint to Dublin.

“We have to decide where we are going, and whether Limerick wants to be one of these,” Mr Moran said. “If we do not strive and succeed to be known globally as one of the best spaces in the world where talented entrepreneurs can live and flourish, they will locate elsewhere.

"Are we going to be left completely out of touch with other local authorities to be the back offices of those entrepreneurs or the places they go on holidays?"