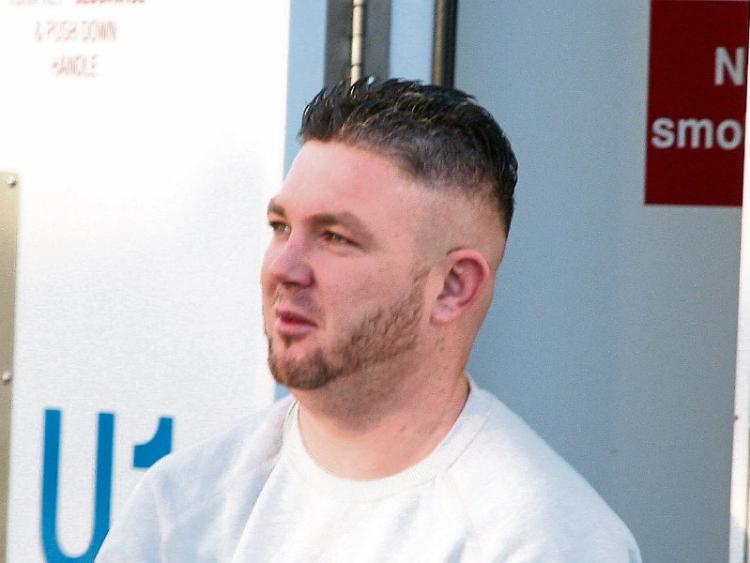 Martin McDonagh, 28, of an unofficial halting site at Coonagh, arriving to court at an earlier date

A MAN who was pursued around the city in a high speed chase by the Regional Response Unit was lucky that he did not kill or seriously injure anyone during the 140 km/hr escapade, described as an act of ‘Russian roulette’, a court has heard.

Martin McDonagh, aged 28, of the unofficial halting site, Coonagh, Limerick, has been jailed for nine years with three suspended, by Limerick Circuit Court, for five offences of reckless endangerment arising from his driving – while under the influence of alcohol and on bail -  and a string of other crimes, including intimidation and possession of articles.

Judge Tom O’Donnell said that there could have been “very serious consequences” arising from the chase which lasted about a half an hour on January 21, 2015, at around 10.30pm at night.

The court heard that the vehicle, a white Volkswagen Golf, which cost €31,000, with €26,000 paid in cash, was being driven at speed around the city that night.

The Regional Response Unit caught up with the accused near the Absolute Hotel, where the accused was on his mobile phone and continued to ignore gardai.

He took off at speeds of up to 140km/hr, and the vehicle later became airborne and went up onto a ditch.

During the pursuit, which passed through parts of Corbally and into parts of south east Clare, McDonagh mounted footpaths, performed dangerous overtaking manoeuvres and failed to stop at a number of ‘blind’ junctions.

"It was the luck of the draw that nobody was injured or killed," said Garda Anne-Marie Hassett.

When the vehicle came to a stop, the defendant attempted to get into the passenger seat and had to be forcibly removed from the vehicle.

At that time, he was also under a driving ban, had consumed alcohol and was almost twice the legal alcohol limit. He was later charged with endangerment at numerous areas across the city.

He also pleaded guilty to three additional counts of assault, including an incident on March 8, 2015, when he warned a victim of his at the Rhebogue halting site that if other charges weren’t dropped he’d “run them off the road”.

The victim was bitten on the lip and had to receive nine stitches, but declined to make a victim impact statement.

The defendant then left the scene at speed, and collided with two ladies, who the court heard were not badly injured.

When he was interviewed by gardai he initially denied any involvement, but later entered pleas of guilty on all matters, “which were of enormous benefit to the State”.

On that occasion, eight men who were carrying an assortment of weapons, including pick-axe handles and screwdrivers, were arrested after gardai stopped a Volkswagen Golf during a surveillance operation which had been put in place outside a house at Bru Na Gruadan, Castletroy.

Detective Garda Ivan Muldoon said the incident was connected to a dispute between members of two extended families. He said on the date of the offence, gardai received confidential information that an attack was to be carried out at the home of Christopher and Nora O’Donnell in retaliation to the making of a formal complaint by the O’Donnells in relation to a previous incident.

Gardai removed the family from the house and set up a surveillance operation – resulting the arrest of the men around an hour later.

Judge O’Donnell likened the behaviour of the defendants to that of a lynch mob. “This type of behaviour is not acceptable in a civilised society,” he said, adding that the level of violence shown was “completely and utterly off the Richter scale”.

The judge noted that the O’Donnells are no longer living in Limerick and that there have been no further incidents since. They also did not wish to make any victim impact statements, which the judge said is their right.

”No damage was caused due to the quick intervention by the gardai,” noted the judge.

The married father of two has 66 previous convictions dating back to April 2006, including seven counts of dangerous driving, eight charges for no insurance, driving while disqualified, public order, theft and burglary, and ramming a Garda motor vehicle.

In relation to the O’Donnell case, the judge said this was a “calculated, pre-meditated and sinister mission”, which McDonagh carried out, “always in company which no doubt increased the level of fear and violence.

In terms of his driving offences, Judge O’Donnell said the defendant has “total disregard for public safety and no regard for road traffic laws” and it was the “luck of God that no one was killed or seriously injured” in the reckless endangerment cases.

He also said McDonagh was “seeking to pervert the course of justice” regarding intimidating those who complained to gardai. “He seems to believe he can sort out everything with threats and intimidation,” he added.

The court heard he has now completed a number of education courses, as well as a 5km yard run while being held in custody. Numerous sentences were handed down for each of the charges, some of which will run concurrent and consecutive. In all, he has been sentenced to nine years, with three suspended, and backdated to March 24, 2015.