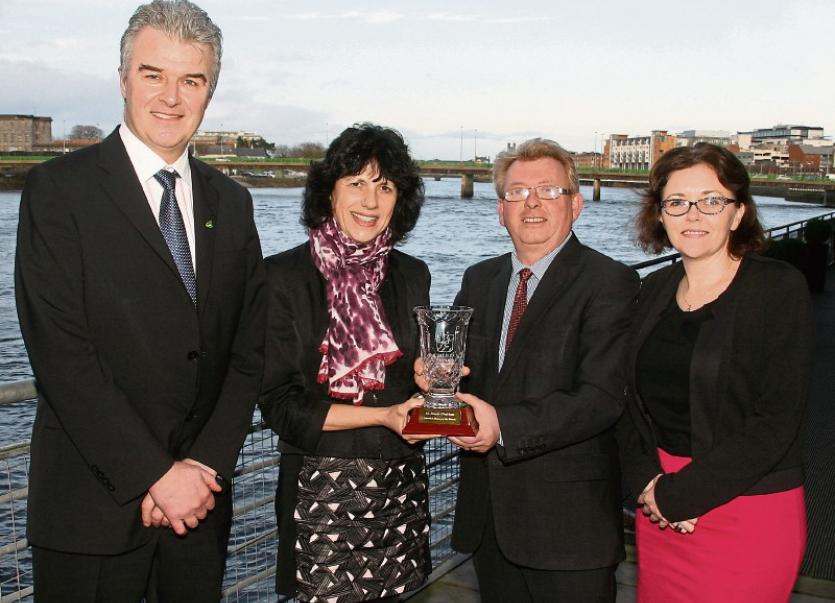 DR MARIA Hinfelaar, who has overseen a major period of expansion and innovation at Limerick Institute of Technology during her 11 years as president, has been honoured with the Limerick Person of the Month award.

Dr Hinfelaar, a native of the Netherlands, joined LIT as president in 2004. She is to begin a new chapter in her career in April when she takes up the role of vice-chancellor and chief executive of Glyndwr University, which is based primarily in Wrexham in north-east Wales.

Dr Hinfelaar was honoured at the Clarion Hotel this week for overseeing extensive, and overwhelmingly positive changes at the Moylish Park facility which has seen an increase in student numbers from 4,000 to 6,500 during her 11 years at the helm. The college currently has a staff of 550.

“It was a very, very pleasant surprise,” said Dr Hinfelaar, on being presented with the award.

“I have had a wonderful time here in Limerick. I am really proud of how far LIT has come. The person of the month award, to me, is recognition of everything that we have achieved at LIT as a team - not just me as Maria  Hinfelaar. We are here to provide a service and to work with the people of Limerick, and the region, to make things happen and that’s what we are proud of.”

When she arrived in Limerick, Dr Hinfelaar was determined to ensure that LIT was not just an educational facility but also an important contributor to the economic, social and artistic life of the region.

“I always felt I wanted to deepen the collaboration with industry and with the region,” she explained.

“That was always very much on my agenda, to make it more outwards  - more engaging and more outwardly focused. I think we have definitely achieved that.”

During her tenure, she has overseen the opening of new campuses and business centres as a result of takeovers of other institutes of technologies across the region.

LIT was named Institute of Technology of the Year 2008/09 and 2012/13 in the prestigious Sunday Times University Guide. Dr Hinfelaar led the successful negotiations that resulted in the Government’s approval for the integration of Tipperary Institute into LIT in 2011.

“We currently have 6,500 students and that number is set to rise.

“Just this afternoon I was looking at our first preferences on the CAO and we are about 450 up on this time last year.

“We have about 1,950 first preferences at this point in time, to come into our first year. This time last year we had just under 1,500.

“We haven’t been able to delve into it yet and we also don’t know how it compares to the national figures but we are amazed with the increase.”

Dr Hinfelaar’s strategic vision has seen LIT make use of the city centre in terms of its development and in ensuring community engagement within the city centre.  LIT have committed to the student accommodation element of the Opera Centre site.

“We are also developing the Coonagh sites for some of our engineering programmes and potentially others that need a lot of workshop space.”

When she arrived in Limerick Dr Hinfelaar was also anxious to make education in LIT more practical and more focused on industry.

“I thought when I came here that you had the basic ingredients but there was just that missing link, that it wasn’t quite connecting as well with industry and the community as much as I would like so I have done that and we have also introduced new programmes that weren’t there before such as music technology and video and sound technology.

“The fashion/design programme already existed but the knitwear and textiles programme was new. There is a whole number of new programmes that we developed in conjunction with all the teams in the school.”

Although she is leaving Limerick - and Newmarket-on-Fergus where she and her husband Graham Park have lived - Dr Hinfelaar says she will be keeping a close eye on the development of LIT and the city centre over the years to come.

But she said is not only about industry and technology and the hard core industries - it is also about creating an attractive environment for people to come to work, visit and live.

“I think we could probably try harder to bring more tourists here and market Limerick as a place that you can strike out to anywhere from Limerick.”

While she admits she will miss life in Limerick, Dr Hinfelaar is always up for a challenge and is looking forward to opening a new chapter in her career in Wales.

“We will certainly be back from time to time. I am hoping to set up some links between LIT and Glyndwr University, for students and staff to maybe work together on some projects.

“I have had a wonderful time here in Limerick.  I will leave part of myself behind.”