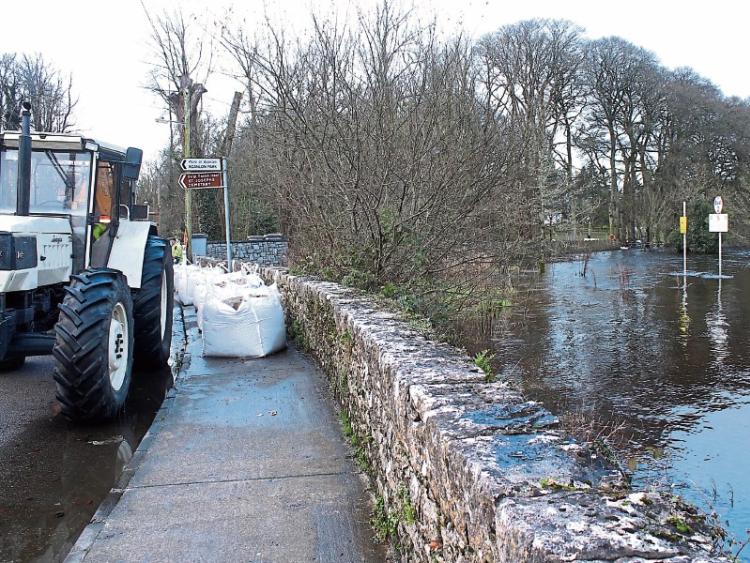 Up to 10 one tonne sandbags put in place to support The Mall wall were vandalised Picture: Michael Cowhey

AT CHRISTMAS Masses in Castleconnell Fr Brendan Kyne praised the “wonderful” work done to protect homes from being flooded.

It was mentioned again at last weekend’s Masses when the parish priest reflected the annoyance of his congregation at vandalism of flood defences.

Up to 10 of the one-tonne sandbags, that were protecting The Mall wall and thus homes and businesses from flooding, were slashed. A number of smaller sandbags and warning signs were also flung into the Shannon.

“I  complimented the  council workers, army, all the volunteers for their fantastic work in the locality over the last two months. They have been very, very responsible, helpful, very considerate to everybody and worked way beyond the call of duty.

“They showed tremendous commitment to the cause. We were more than surprised and very disappointed when the sandbags were vandalised after all the very good work had taken place,” said Fr Kyne.

A council spokesperson confirmed a number of the one tonne sandbags had been tampered with.

“We would appeal to members of the public to not tamper with sandbag defences as they are playing an important role in preventing the flooding of property and land. Such behaviour also posed a health and safety risk to those engaging in it,” said a spokesperson.

It is understood that this type of behaviour hasn’t just happened in Castleconnell but across the country in areas at risk of flooding.

Deputy Kieran O’Donnell said the actions by a tiny minority were “disgraceful”. “The collective work by all the community associations in Castleconnell, the people themselves along with the council was supreme.

“It was a monumental effort and this slashing of sandbags, which were barriers to protect the homes of people living in Castleconnell village, was disgraceful,” said Mr O’Donnell.

A member of the locality who contacted the Leader on Monday morning said it was “unbelievable”. “After everybody put their shoulder to the wheel It is absolutely disgusting.”