May weekend run in Limerick to be the 'biggest yet' 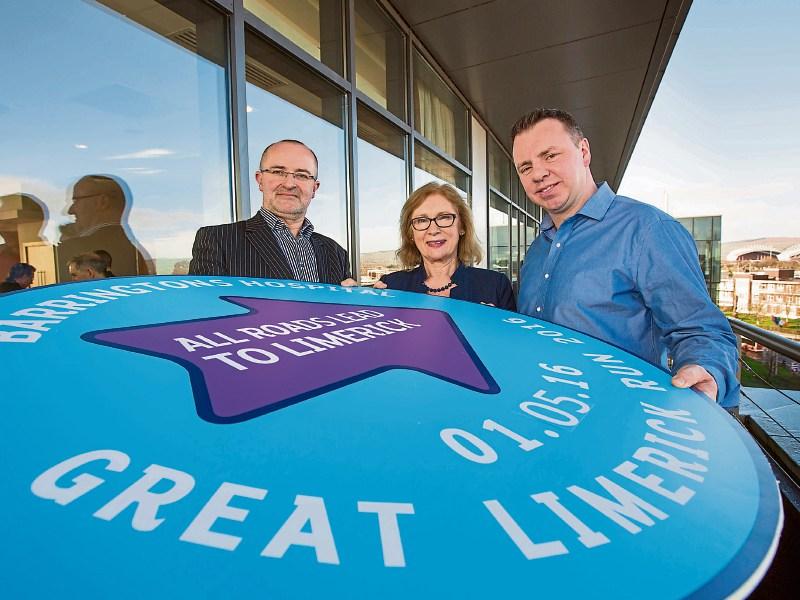 OVER 14,000 people are expected to take part in the upcoming seventh annual Barringtons Hospital Great Limerick Run, which is due to deliver a €5m boost to the local economy over the May Bank Holiday weekend.

The series of runs on Sunday, May 1, as well as children’s runs earlier that weekend, will coincide with the Riverfest celebrations, with the full line-up yet to be announced.

All 2,000 tickets for The Coronas’ gig at King John’s Castle that weekend have been snapped up, just over an hour after going on sale, while Limerick band Hermitage Green have been booked up to play at the Big Top in the Milk Market on the Sunday night.

Launched this Monday at the Strand Hotel, the organisers of Limerick’s biggest running event said that they expect entries to exceed last year’s participant numbers of 14,200 based on the current increased level of early registrations.

Nearly 2,000 registrations have already been received to avail of the early bird discounted race entries over the three race distances on Sunday, May 1.

The run is now the largest mass participatory event outside of Dublin and the only annual ‘tier one’ event in the Mid-West region. The event draws participants from every county in Ireland, as well as runners from across the globe.

Speaking at the launch, race director John Cleary confirmed that the Munster Athletics Council have now designated both the marathon and half marathon as their official Munster championship races.

This designation, which will entice higher numbers of competitive athletes chasing personal best race times, is a reflection on the growing status of the BHGLR as a premier running event.

“I also wish to acknowledge the huge levels of support from the people of Limerick and beyond who have demonstrated in numbers both participating and watching year on year that the Barringtons Hospital Great Limerick Run is now a firm favourite on the Irish sporting calendar,” he said.

“The public private partnership model has allowed us as race organisers to deliver a world class event to Limerick with an economic value in 2016 estimated now in excess of €5 million to the local economy according to the latest economic impact report.

“The support and commitment of Barringtons Hospital as title sponsor along with Limerick City & County Council and other commercial and statutory sponsors including sports apparel company Brooks UK & Ireland reflects the confidence that all stakeholders and partners have in the future growth potential of the event.”

Presentations were made at the launch to John Clancy, a lead cyclist for all events. “Even when the marathon race is over, he returns to cycle as the lead for those doing the half marathon,” said Mr Cleary. Another plaque was presented to Paul Murray, a physical therapist.

In anticipation of the increased demand for places in the children’s ‘UL Sport Run for Fun’ which takes place in the University of Limerick on Saturday, April 30, capacity has been extended to accommodate 3,500 children which is now the largest children’s event nationally.

To date the ‘UL Sport Run for Fun’ has raised over €75,000 for those primary schools with participating children.

Denis Cahalane, managing director of Barringtons, said the hospital is proukd to continue its title sponsorship of “an event that promotes Limerick in a positive manner on a national and international scale.”

Speaking at the launch, Mr Cahalane said when the possibility of sponsoring the event was first raised, it was asked of him, ‘What does it do for the city?’

”This is about pushing the city, and pushing ourselves. It’s up to all of us to make this city great, and kick the criticism [of Limerick] into touch,” he said.

Mayor of Limerick, councillor Liam Galvin, urged prospective entrants that the run is “about competing, not setting world records.”

“Maybe after the election, I might be a bit fitter to take part myself,” he joked.

Minister for Education Jan O’Sullivan, who previously took part in a political line-up for the marathon relay, in particular welcomed the growing number of children taking part in these races, due to concerns about child obesity.

From the inaugural race in 2010, over 55,000 people have crossed the finish line, raising €2 million for various charities.

Entries for the marathon, half marathon, and 10km, can be made online at www.greatlimerickrun.com/

The early bird prices apply until February 6. Thereafter, entry for the marathon will be priced at €75, the half-marathon will cost €57, and the six-mile race will cost €27.

There are more than 90 days yet to enter – and train!