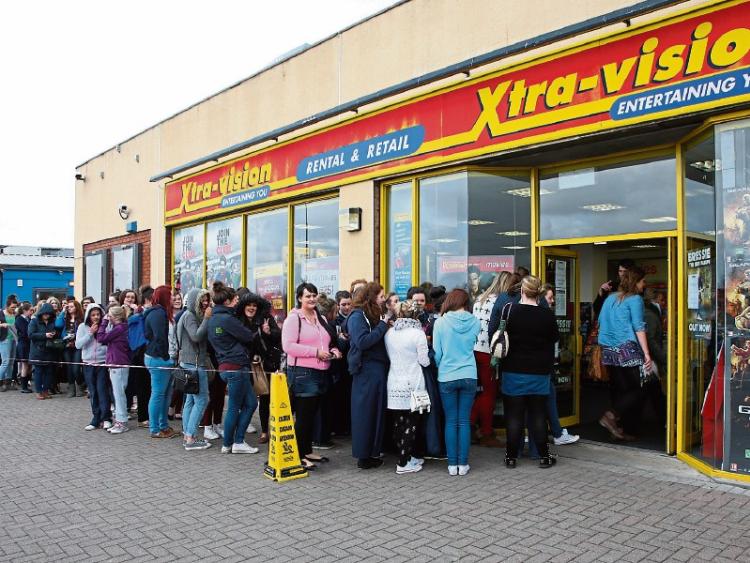 Fans queueing outside Xtravision in the Parkway several years ago. The store is to close

And it appears likely the DVD rental chain will disappear from the streets of Limerick, and the rest of Ireland, after a provisional liquidator was appointed to the company.

It is understood up to 20 jobs will be lost at Xtravision’s branches at Dooradoyle and the Parkway Shopping Centre. A third Xtravision branch at the Ennis Road closed in 2013.

Oxtermount Ltd, the holding company of Xtra-Vision Entertainment Ltd, confirmed all stores on this island would close on Wednesday night.

They said that changing market forces has led to a 30% year-on-year drop in DVD rental.

Michael McAteer of Grant Thornton Ireland has been appointed liquidator to the company.

Policy director with the Limerick Chamber Dr Orlaith Borthwick said: “Our thoughts are foremost with those who are now facing unemployment due to this announcement. Unfortunately it would appear that the loss of Xtra Vision is a reflection of a changing market place in how the products which they sell are now consumed.”

She said the Chamber can offer support to affected staff, through various courses, and added: “Many Limerick Chamber members are actively recruiting.”

Xtravision employs 580 people island-wide, with the majority of these jobs likely to go.