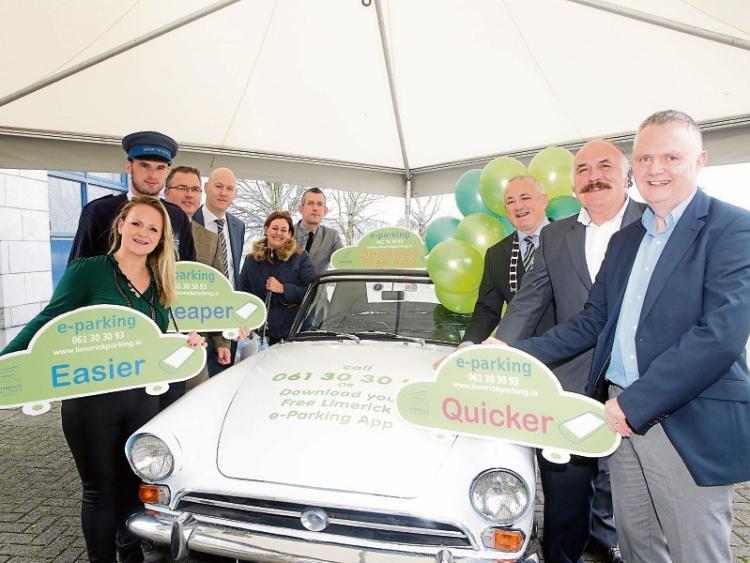 Rory McDermott, far right, at the launch of the council's e-parking initiative

LIMERICK now has the cheapest parking in Ireland, officials boasted at a City and County Council meeting this week.

And they say that E-Parking or smart parking is the quicker, easier and cheaper way to park while doing business in Limerick.

“It also cuts out the running to buy a parking disc in the rain,” council official Rory McDermott, said when he reported on the new scheme at Monday’s meeting of Limerick City and County Council

Since the launch of e-parking in Limerick, there have been 17,000 registered customers and 2000 new customers have downloaded the parking app, Mr McDermott said.

Now, one in every  three people is using smart parking  rather than  a parking disc.

But the hope is  that the 65% of people still  using  discs will shrink in the course of 2016 as the numbers using e-parking grow. And the council will be advertising the  benefits of the new system.

However, Mr McDermott reassured councillors, disc parking will remain as an option.

E-parking provides a one-stop shop, he told the councillors.

It allows  people to locate and book parking both in the city and in the towns of Newcastle West, Kilmallock and Abbeyfeale and  to pay for it electronically. It is also cheaper.

“You park for 50 cent for half an hour,” he explained.

The website will tell you everything you need to know about on and off street parking, he added.

It is simple to register,  the user gets text alerts and parking time can be extended remotely.

Options for overnight parking and for full-day off-street parking for €5 are also on offer.

“It is a joy to use it,” Mayor Liam Galvin said, pointing out that he has made good use of the new system since becoming Mayor.

“Limerick has the cheapest parking of any city in Ireland,” Cllr Maurice Quinlivan said.

“That is the message we really need to get out there.”

However, Cllr John Gilligan raised a concern about the excessive numbers of what he called “blue stickers” or disabled parking disks.

“We seem to be turning out more cripples than in the First World War,” he said.

There are, he added,  “people who work 40 hours a week but  can’t walk from here to there.”

There was a need to enhance parking for people with disabilities, he argued, but they also needed to “take a long, hard look at other people who are abusing it.”