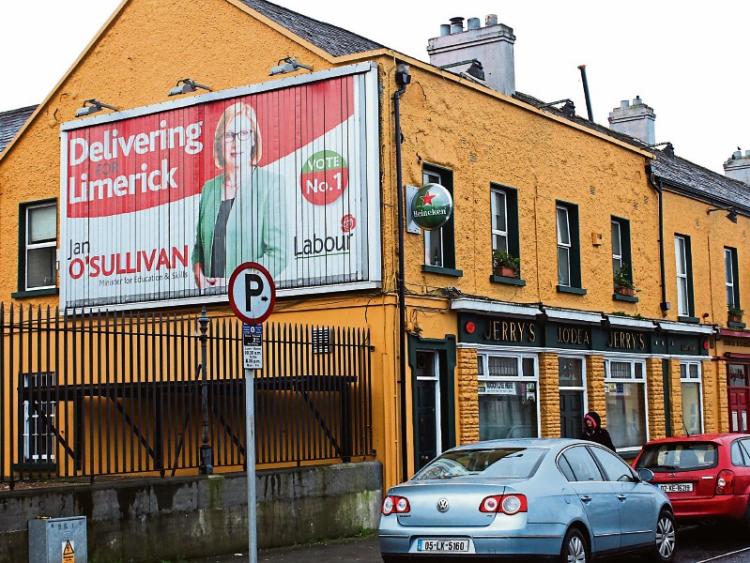 EDUCATION Minister Jan O’Sullivan has secured support for her election campaign – from an unlikely source.

Cllr O’Dea says he is “flattered” at the decision to use his pub, where his cousin, the former Defence Minister Willie O’Dea holds weekly constituency clinics.

“It is an interesting ad. I would lease the site to a contractor in Dublin, so it would not be my decision as to what signs go up. But in saying that, I have always had a great working relationship with Jan, and I am a bit flattered she has chosen the side of our building to promote her [campaign],” he said.

The City East councillor said he wishes Ms O’Sullivan the best in the election campaign, saying: “She would be well regarded locally.”

He jokingly added: “If my cousin Willie wants to put a sign up there alongside Jan’s, we would be open to suggestions.

“He has had a clinic in our pub the last 30 years. Maybe he needs to find the funds and get his own sign up there soon!”

Ms O’Sullivan said Cllr O’Dea’s pub was chosen due to its location in Limerick.

”We have put up four of these posters. We were picking good entry routes into Limerick, where there would be a lot of passing traffic, both cars and pedestrians, and it was one of the locations we were able to secure.

“But I’m delighted we are on the wall of such a well established and a well-renowned hostelry, and I am sure it will not do any harm to Jerry O’Dea or his clients,” she said.

First elected at a by-election in 1998, Ms O’Sullivan is seeking a fourth full term as TD in the city.