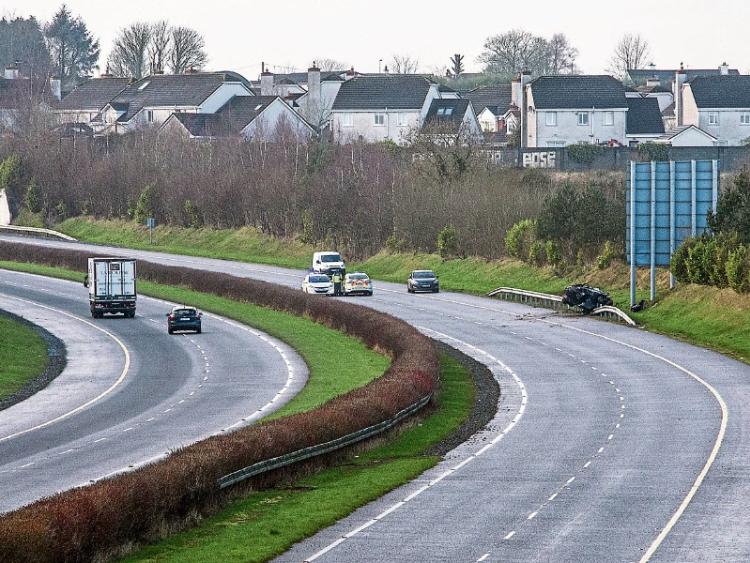 The scene of the crash on the M7 this week. Picture: Keith Wiseman

TRIBUTES have been paid to the man who was killed in a single-vehicle collision in Limerick city earlier this week.

Roibeárd Thornton, who lived in Limerick, was driving along the M7 motorway, northbound, near Castletroy, and suffered fatal injuries after his car crashed through railings and went into the ditch just before 10am on Tuesday.

Mr Thornton will be buried at Kilmurry cemetery, following a mass at Our Lady Help of Christians church in Milford on Saturday at 11.30am.

The 34-year-old, who graduated with a PhD at the University of Limerick in 2009, was a father-of-one and was living with his wife, who is a Limerick woman, in Annacotty. Mr Thornton, originally from Lixnaw, in Kerry, was a county champion hurler.

Mayor of Limerick City and County, Cllr Liam Galvin, said that he personally knew the Thornton family and the victim’s sister Cllr Aoife Thornton, who is a Fine Gael representative in the Listowel district.

“It’s a very, very sad day. To be honest about it, I haven’t had a whole pile of appetite for working today when I heard about the accident. It’s an awful tragedy and we are very heartbroken over it, and our thoughts and prayers are with the family,” he said.

Cllr Marian Hurley, who lives in Annacotty, said: “My heartfelt sympathies go out to the family and his extended colleagues. It’s just a terrible loss and an awful tragedy.”

The 34-year-old played with his former local GAA club in Lixnaw and was also a member of Finuge GAA club.

On Tuesday evening, Finuge GAA club and Lixnaw GAA club issued a statement via social media and said that all associated activities with the clubs were cancelled until further notice.

“Roibeard played for Lixnaw Hurling Club since his early childhood and was part of the Lixnaw County Senior Hurling Championship winning team of 2005. He also won County Minor Championship in 1997 and U21 County championships in 1999 and 2002.

“He was very popular with his team mates and this tragic news is keenly felt by all members of our club, but especially by those players and mentors who soldiered with him in the past. Roibeard’s tragic loss has come as a terrible shock to all in our GAA community,” Lixnaw GAA club said on its Facebook page.

On Tuesday morning, emergency services - five appliances from the Limerick City and County Fire Services, ambulance services and An Garda Síochána - were called to scene at 9.59am.

As a result of the incident, junction 28, in Ballysimon and junction 29, Castletroy, were closed for a number of hours. It was the first road fatality to occur in the cityfor 18 months.