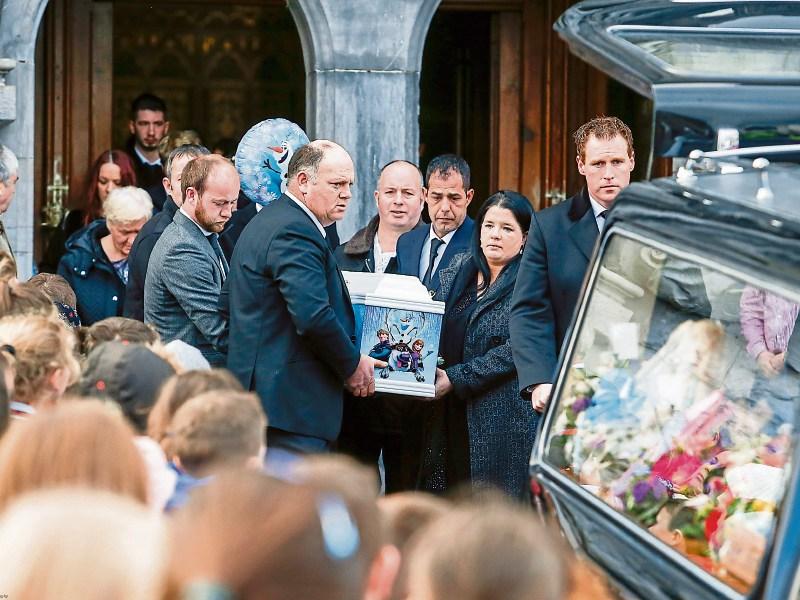 A LITTLE girl who died from a rare form of cancer was laid to rest in a Frozen-themed coffin this week.

Hundreds of people turned out to say a final farewell to the “sweet princess” Alexandra Costa-Burke who was obsessed with the Disney animation, Frozen.

“She must have watched it around a thousand times. She had the song, Let it Go, off to a tee,” said her mum Tracy.

She was laid to rest in Effin Cemetery wearing her Elsa dress, surrounded by her Elsa and Anna dolls, her music box, and all her teddies with her rosary beads in her hands.

Even her small white coffin was decorated with her favourite characters from the film.

Custom-made in Dublin, the blue and white coffin was tastefully adorned with the friendly faces of Frozen’s Elsa, Anna, Kristoff, and Hans. A foil helium balloon decorated with the friendly snowman Olaf, also from Frozen, swayed gently from side to side. It was tied to a brass handle of the coffin.

At the start of Monday’s funeral Mass at St Peter and St Paul’s Church in Kilmallock, Alexandra’s younger sister Vanessa, 4, walked up the aisle holding Alexandra’s Elsa doll before presenting it to the awaiting clergy.

“Vanessa knows she had a pain and it couldn’t go away,” Tracy explained.

Alexandra was diagnosed as a baby with rhabdomyosarcoma, a rare cancer that forms in the soft tissues and can attack all parts of the body. She passed away peacefully surrounded by her loving family at the Children’s Ark and Sunshine Ward at University Hospital Limerick.

“The sense of relief that she is out of pain is unbelievable. She went through too much,” said her mum.

Five weeks ago, Alexandra Costa-Burke, 5, had been admitted to the Children’s Ark. Her final days were spent laid back on her pillows, her strength failing, her smiles hard fought.

But when Tracy entered her daughter’s room the night before she passed away, she was surprised by the little girl’s demeanor.

Alexandra was saying goodbye to her mum who she had slept with every day since she was born. The next day, she surrendered to death.

“She had no strength for days before that. She got strength from somewhere and she wouldn’t let me go. I will never forget it for as long as I live. I thought it was beautiful, I really did,” said Tracy.

Alexandra loved music. Her remains were carried into her local church to a beautifully haunting rendition of Suffer Little Children by the local choir. After Communion, a hush descended across the church’s three aisles as local girl Lisa Finn sang Louisa Johnson’s rendition of Forever Young.

Daffy’s Funeral Home in Kilmallock where Alexandra was laid out was decorated by family members with all her favourite Frozen toys.

As her coffin was lowered into the soil of Effin Cemetery children released Frozen balloons into the clouds.

Her big sister had taken her seat in the sky.