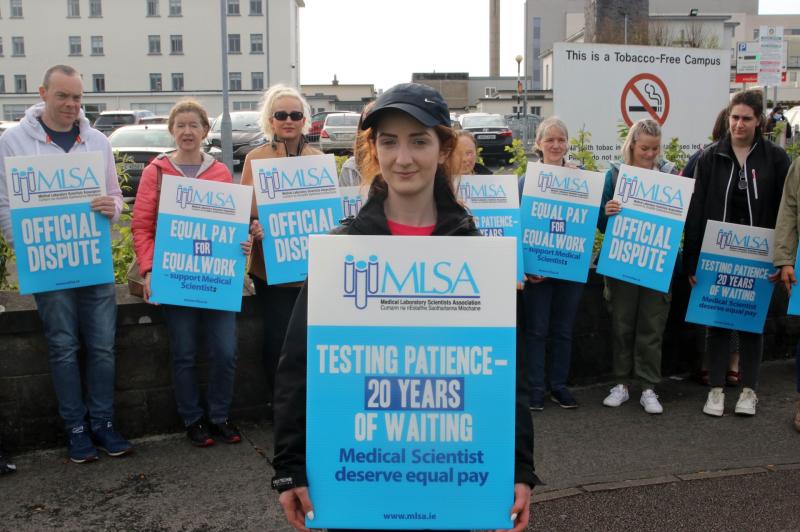 THE UL Hospitals Group is warning of 'significant disruptions' to elective procedures and outpatient appointments due to this week's strike action by members of the Medical Laboratory Scientists Association (MLSA).

The industrial action between 8am and 8pm on Tuesday and Wednesday follows on from last week's day of action over a long-standing dispute over pay and career development.

In a statement, issued this Monday evening, UL Hospitals says further disruption and delays to some services can be expected across its six sites due to the escalation of the MLSA action.

"While efforts continue at national level to try and avert the industrial action, UL Hospitals Group has continued engaging with the MLSA to ensure that arrangements are in place to safely provide a curtailed range of services on our sites this Tuesday and Wednesday," said a spokesperson.

ULHG says it has been directly contacting all patients whose appointments will be cancelled due to the industrial action.

Outpatient appointments that do not require bloods to be taken will go ahead and patients with an appointment this Tuesday and Wednesday and who are not contacted, should attend as scheduled.

Essential services at University Hospital Limerick, including oncology and dialysis, will remain open as will the hospital’s Emergency Department.

Medical Assessment Units at St John's, Ennis and Nenagh Hospitals will be running reduced services, while the Injury Units will be open as normal.

Some elective surgeries have been cancelled at the three hospitals as well as at Croom Orthopaedic Hospital.

At University Maternity Hospital Limerick, C-sections and inducements, the emergency maternity unit and neonatal emergency department services will continue, as will labour ward services and most antenatal appointments.

"While patients with less urgent conditions attending the emergency department at UHL can expect delays in service this Tuesday and Wednesday, we wish to reassure the public that the department will be open, and that the sickest and most urgent cases will be prioritised for treatment," said a spokesperson.

UL Hospitals says it hopes to re-schedule all cancelled procedures as quickly as possible.