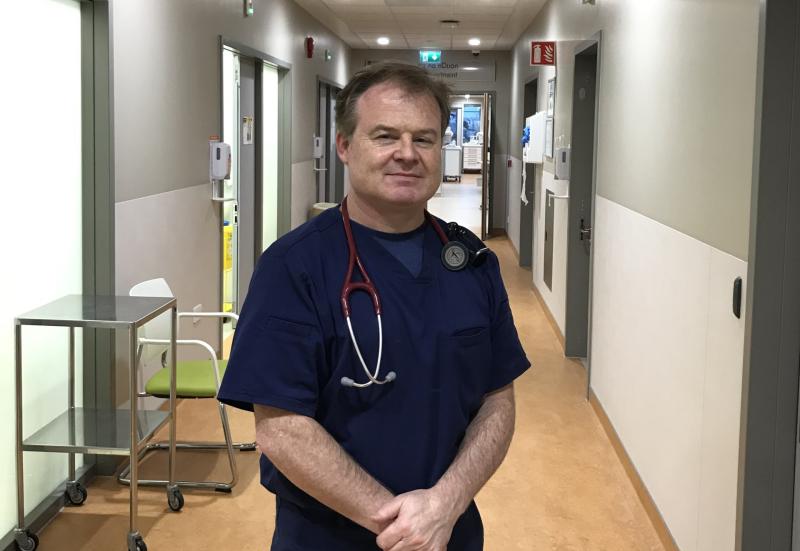 Professor Austin Stack, a senior author of the study

A STUDY carried out by researchers at the University of Limerick study has found the treatment used in the majority of Irish kidney failure patients may lead to higher rates of hospitalisation, infection and even death.

The research, carried out by a team at the School of Medicine, found high rates of central venous catheter dependency in Irish patients undergoing haemodialysis, which the researchers believe may lead to worse clinical outcomes than those in other countries.

Patients who develop kidney failure are hugely dependent on their ‘lifeline’ connection between the dialysis machine and the patient’s blood vessels. This connection is usually in the form of an arteriovenous fistula (AVF), a surgical connection between a vein and artery in the patient’s blood vessels, or a large central venous catheter (CVC), which is an artificial plastic tube inserted into a large vein in the body (usually a neck vein).

The new study by the UL researchers, published in the journal Kidney360, found extremely low rates of AVF placement with correspondingly high rates of CVC use in dialysis patients, which may predispose patients to higher rates of hospitalisation and death.

The research shows that Irish patients who started dialysis were more likely to be using a catheter than a fistula (77% versus 23%) for treatment, and that the percentage of patients with a functioning fistula varied substantially across major centres in Ireland. The proportion of patients using a fistula only increased modestly at the end of the first year on dialysis.

International studies have proven that countries that adopt a policy of using a fistula in preference to a catheter have better clinical outcomes for their patients than those who do not.

“When catheters are used for haemodialysis, they predispose patients to higher rates of infection, clotting problems, hospitalisations and even death,” explained Professor Austin Stack, Foundation Chair of Medicine at UL’s School of Medicine and Consultant Nephrologist at University Hospital Limerick, who was a senior author of the study.

“As a result national clinical programmes and professional societies have advocated for the use of fistulas in preference to catheters for most patients who start haemodialysis. The results of this new national study highlight that Ireland lags behind international best practice in the achievement of fistula rates for patients treated with haemodialysis,"  added Professor Stack.

He says the low rates of fistula use and high rates of catheter dependency at the start of dialysis are very concerning and "need to be tackled at a national level".

The study, funded by the Health Research Board (HRB), looked at 610 patients initiating haemodialysis in Ireland between January 1, 2015 and December 31, 2016, with a follow-up one year later.

It reveals a need for a detailed investigation of why fistula rates are so low in Ireland compared to other European countries, according to Dr Wael Hussein, lead author.

“Our analysis suggests that factors relating to the organisation and planning of vascular access - i.e. those operating outside the patient domain - at the individual centres were responsible for the observed poor results,” he explained.

“These factors might include the resourcing of the current national haemodialysis programme with dedicated vascular surgical support and access to theatre time, recruitment of vascular nurse specialists similar to international centres of excellence, and high level coordination of the vascular access pathway with quality metrics to ensure timely implementation,” Dr Hussein added.

With over 500 new patients in Ireland developing kidney failure and requiring dialysis each year, and in excess of 2,000 patients undergoing treatment on the haemodialysis programme annually, Professor Stack said that the “national programme for dialysis needs to be resourced and empowered to deliver for our patients”.

Dr Mairéad O’Driscoll, CEO of the Health Research Board, added: “We aim to support research that improves people’s health, improves patient care, and saves lives. This study does exactly that, as it will lead to improved care and outcomes for Irish patients undergoing haemodialysis. We wish Professor Stack and his team continued success with their research.”