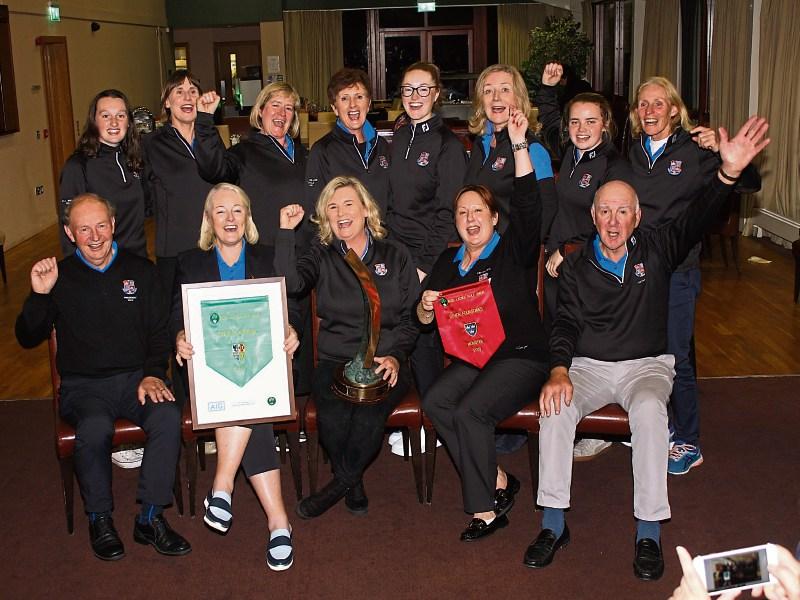 CHAMPIONSHIP golf is a mental game. Keeping one's composure and concentration solely on the job in hand and never allowing circumstances beyond one's control to get the better of one, pays big dividends.

Never was this more true than last weekend, at the always well-attended, always colourful and always tension packed AIG/ILGU National Club Finals, which were staged at the Knightsbrook Golf Resort in Trim in County Meath last weekend.

In order to emulate the Barton Shield victory of their male club mates one week earlier and carry off an unprecedented double, Limerick Golf Club's Ladies Senior Foursomes team had to maintain their focus in extraordinarily disruptive circumstances. It was also Limerick GC's third All Ireland title win in three weeks.

Winning a coveted AIG/ILGU green pennant is never easy but rarely has a victory come accompanied by so much disorder, confusion and prolonged tension. To say the disruption could have been disastrous is an understatement but it was hardly foreseeable or avoidable.

A protracted heavy downpour flooded the golf course on Friday morning, which caused a delay of three hours and forced a rescheduling of the entire programme of the six competitions down for decision.

One knock on effect meant play was halted due to falling darkness with four holes still to be completed in the delayed senior foursomes final on Friday.

Before that match began, the non-playing team captain, Ailish Dilger, had to make a dramatic, last minute change to her team as Limerick was also involved in the Junior Cup competition. Dual player, Siobhan Conway was on the golf course locked in battle playing the third tie hole in her Junior Cup semi-final match at the same time as her foursomes match was due to begin. Just as Heather Fitzgerald completed her win on the 18th green in the Junior Cup, she was shocked to be told her presence was required immediately on the first tee to substitute for Siobhan with no rest, no lunch, no opportunity to change into a fresh pair of socks and shoes - just play on regardless!

When play resumed on Saturday morning, Limerick's No. 1 pairing of Emma Guinane and Fiona McGann completed a brilliant, unbeaten weekend with a display of highly-competent golf under extreme pressure to secure the first, vital point.

Orla Barry and Catriona Finucane were never going to pull back a four-hole deficit so, it was left to late substitute Heather Fitzgerald, now fully refreshed after a night's sleep, and Eimear Walsh to win the deciding match, which they did with a carefully played par on the danger-strewn, par 3, 18th as their equally doughty Massereene opposition 3-putted under the mounting pressure.

The Junior Cup was equally tight. In the semi-final against Newlands, two matches had to go to tie holes before Elaine Morris won the 18th to finish all square and then played the 19th hole superbly to bring her team through.

In Saturday's final, Limerick's No. 1, Mary Conlan, was coasting serenely at 2-up after 8-holes when she was hit by a barrage of stunning under par golf that included two holed chip shots to square the match.

This time, unfortunately, Limerick's luck ran out at the 19th as the pendulum swung in Enniscorthy direction. Personal wins by Siobhan Conway and Ann O'Mahony were in vain.

After it all, Team Captain Ailish Dilger said: "What a super feeling. We’re overcome with excitement and emotion".

Mary Fallon, Team Captain of New Forest GC, winners of the Minor Cup said this: "We only affiliated to ILGU 6-years ago and two years ago, we hadn’t enough players to field a team. Now we are, All-Ireland Champions! Fallon only started golf after retiring from work and admits, she was never a golf lover and spent her life giving out about the game because she thought her husband played 'too much'. When she retired, she decided (reluctantly) to give golf a go herself. Now, she's a big advocate because she found out how healthy golf is, physically and mentally. "For women of a similar age to me, who have spent their lives driving kids around and whatever else, golf is the perfect sport. I cannot promote golf enough, I am completely turned around."