'A History of Women's Golf in Ireland' by Ivan Morris 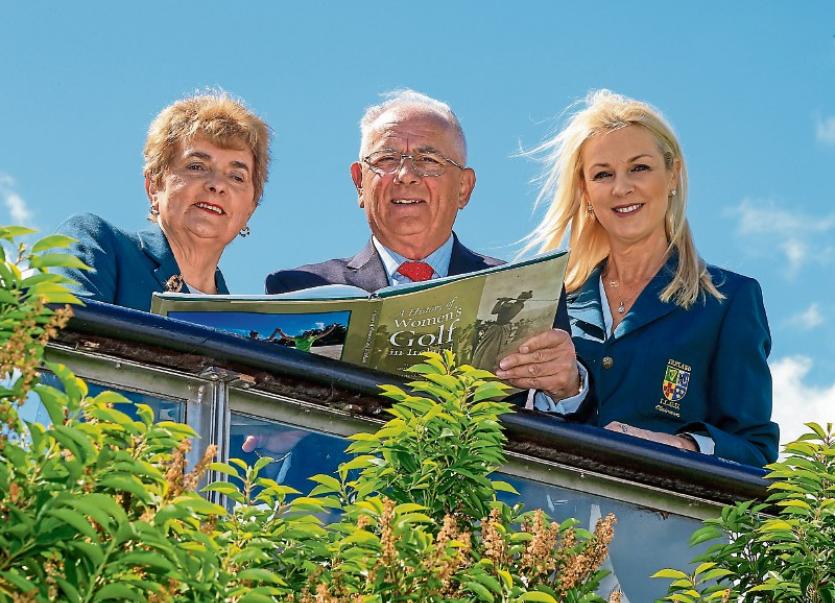 AS a mere male, I was delighted to be invited to write such an important and historic book as ‘A History of Women's Golf in Ireland’ for the Irish Ladies Golf Union.

From my point of view, it was an absolute pleasure getting to know the great women of the ILGU, past and present. It has always been clear to me that a woman could be just as committed to golf as any man. I observed it at close quarters growing up. My mother, Bernie, played enthusiastically into her late-70s.

She served on committees and became Secretary, Treasurer and Captain of the Ladies Branch at Limerick Golf Club (not all at the same time, of course) Mum loved to play golf but she talked the talk too. She was the reason I called my first book: Only Golf Spoken Here.

Golf suits females because it is a technical, graceful and skilful game that does not rely on brute strength. You don't have to be a trained athlete to play golf moderately well. Golf is a social game that doesn't have to be competitive. Walking 5/6-miles in the fresh air is good for one's health and helps to prolong one's life.

In 1907, May Hezlet wrote the following: Golf is the game - par excellence - for women. The girl of the present day must have some outlet for her superfluous energy. A quiet walk in the garden is not enough. Exercise when combined with healthful exertion is most desirable. The lives that girls led in olden times were too narrow.

Now, all is changed and women have become a power in the world; have a right to their own feelings and opinions. An open-air life encourages people to take a broader view. It is nigh impossible to feel depressed when playing an interesting game in the cheerful sunshine.

An open-air life is of great assistance to a light-hearted disposition. (Golf) teaches self-reliance, adaptability, broad-mindedness and develops self-control and imperturbability. Golf is a boon and blessing for many women who would otherwise be leading aimless lives.

When one sees the advancing numbers frequenting the links, one wonders how they managed to exist before they learnt to play golf? I agree with all of that and the comments of a golf writer friend of mine in the North of England, who on hearing about the development of a One Governing Body for golf in Ireland, asked: "Why bother? Women have been treated so badly in golf clubs for so long.

Many male golfers are very offhand towards women golfers despite the fact that they are often faster in getting around the course and a lot more polite. Women often have more respect for the rules, which is reflected in the number of qualified R&A female referees there are.

In my opinion, women are social golfers that bring life into a club. They are better organisers and are smarter about running club matters too. Best of all, when they say they will do something, they always do - unlike a lot of men”

Because this book is about the achievements of generations of great, women golfers, I had to trawl through a mountain of club histories and newspaper archives.

To form a Ladies Golf Union in 1893 was a brave step. The ladies who did it could be regarded as 'the suffragettes of golf.'

Their persistence in the face of silly male rules, like being barred from entering through the front door of a clubhouse or walking past the window of the men's bar, should have put anyone off golf but, the pioneering Catherine McGee was a determined lady, made of stern stuff.

On a personal note - this is my seventh book. In hindsight, it is the one I was working towards since the very first day I began writing almost 20-years ago. I have had more satisfaction from writing than I ever had when playing championship golf.

The 'find outs' that caught my imagination most during my research were:

Learning about the ever so determined, Catherine McGee, who started it all in Rory McIlroy's home village, Holywood, between Bangor and Belfast. The Hezlet sisters who created an eye-catching, peloton when all four of them, cycled daily behind their golf-besotted mother to Royal County GC at Portrush.

Rhona Adair's extraordinary tour of USA and Canada in 1903 with Harry Vardon. The far-seeing, Dorothy Glendinning - who started junior girls golf at Portrush in the early-1960s.

The unparalleled career of Philomena Garvey, 15-times Irish champion between 1946 and 1970.

The gregarious and personable, Mary McKenna, 8-times Irish champ and 11-times a Curtis Cup star is surely worth a book on just herself alone?

The heart-warming story of Claire Hourihane's debut in competitive golf that culminated with her being the first Irish woman to be invited to join the R&A.

The equality of the sexes issue in golf that caused so much (unnecessary) angst for so long.

The unveiling the full significance of Miss Eithne (Iny) Pentony's golfing achievements before she became Mrs Michael Roberts and moved to Limerick where her husband, Michael, was a respected surgeon at Barrington's Hospital.

This book is like an onion, there are so many layers to it with the many personal anecdotes never-endingly revelatory, educational and amusing!