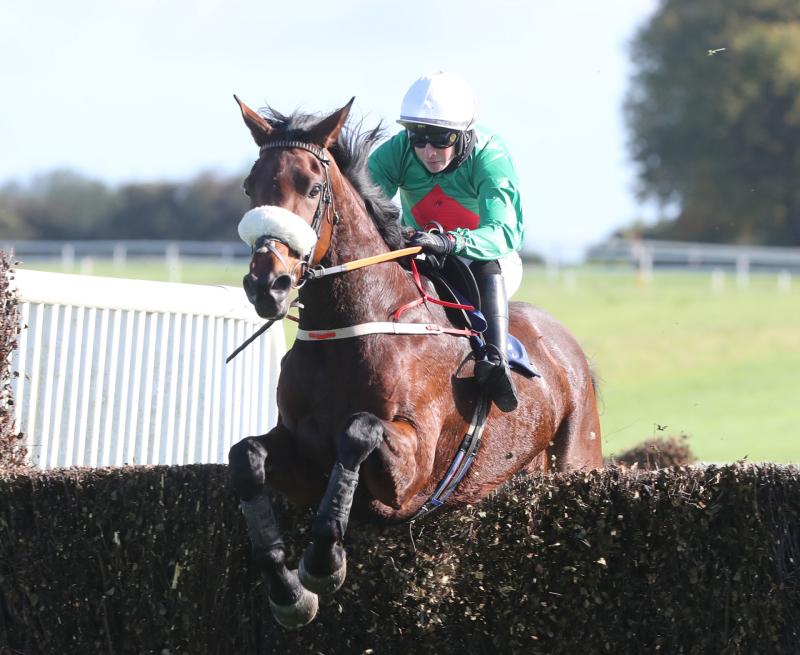 Billy Lee has ridden in excess of 50 winners in a season on four previous occasions and a great run of success during the week left him of verge of another half-century. He reached the 46-winner mark with a winner for Willie McCreery and owner/breeder Eimear Mulhern at Gowran Park on Monday. He easily won the fillies and mares’ maiden over a mile on Punakha, a 13/8 chance, which beat the Johnny Murtagh-trained 11/8 favourite New York Angel by four and a quarter lengths.

Lee was a winner again at the same track the following afternoon where he partnered the Edward O’Grady- trained Act Of God to win the opening division of the 14-furlong handicap. In the colours of owner Brian Comer, the 14/1 chance came from well off the pace to beat the Jessica Harrington-trained Autumn Evening by half a length.

He ended the session at Navan on Wednesday with 49 winners after landing a double in consecutive races. He got up on the line on the Ken Condon-trained Cleveleys to take the five and a half-furlong handicap for owner Caroline Fennessy. The 16/1 chance defied top-weight when pipping front-runner Drummond Warrior by a short-head. Lee then made all the running on the Michael Grassick-trained Elanora to win the five-furlong maiden. The 15/8 favourite, carrying the colours of Joe Keeling, comfortably accounted for the Joe Murray-trained Mickey The Steel by a length and a quarter. Chris Hayes made it 55 winners for the season with his success on the Fozzy Stack-trained Pita Pinta in the ten-furlong handicap for three-year-old. It was easy for the 20/1 chance as he raced clear inside the final furlong to beat the Jessica Harrington-trained Hell Bent by three and a quarter lengths.

On the day his great stalwart He’llberemembered was honoured in the race names, County Kildare trainer Paul Fahey was on the mark with a Donie McInerney-ridden winner at Thurles on Thursday. They landed the opening mares’ beginners’ chase with Ballyshannon Rose which impressed with her three-length over Gordon Elliott’s Sliding Rock. Fahey said, “The mares’ novice chase programme is a good one but some of the races might be too short for her. There is the Florida Pearl at Punchestown over two-miles-six and then hopefully on to the three-miler at Christmas. She’s a very exciting mare and we’re looking forward to going places with her.” Gary Noonan landed the mares’ maiden hurdle on the Edmond Kent-trained 9/1 chance Lighthouse Lady. Owned and bred by Noel Brosnan, the five-year-old first saw off the Gordon Elliott-trained 6/5 favourite Hollymount and then held on to win by half a length from the Ellmarie Holden-trained Choral Work. Cathal Landers took the mares’ handicap hurdle on the Jimmy Barcoe-trained Influential Lady. The 13/2 chance carries the trainer’s own colours and she raced to a two and a quarter-length win over the Mark Molloy-trained Farrawaybay.

Conor McNamara has enjoyed a strong year in the saddle and is capitalising on the increased opportunities on offer from boss Gavin Cromwell, as illustrated when White Pepper scored in the Renvyle House Hotel 3YO Maiden Hurdle in facile fashion in Galway on Saturday. The daughter of Fast Company enjoyed the ease in ground to produce an excellent jumping performance and ease clear by 13 lengths.

Wesley Joyce will never forget the 2021 season, when he secured his first ride and first victory and the Moyross teenager brought his tally for the campaign to an unbelievable nine thanks to the Mick Mulvany-trained In From The Cold, the four-year-old benefiting from a drop in the ratings to collar the pacesetters close home under an astute piece of navigation to score in the Leopardstown Autumn Festival Handicap by half a length. And another Limerick rider enjoying a tremendous year, Billy Lee took the concluding Ardilea Handicap on Tony Martin’s fantastic servant Tudor City, the heavily-backed nine-year-old responding well when asked to quicken late on to take the honours by a cosy half-length.

Cathal Landers has built a nice little relationship with the Jimmy Barcoe-trained Jiving Jerry, and the Oola native delivered the six-year-old with perfect timing to grab the spoils in the W B Gavin & Co Handicap Hurdle by a head and a half-length in a thrilling finish at Galway on Saturday. A previous winner at Ballybrit, Jiving Jerry was recording a fourth career success, with Landers now on board for the last two.

There was a welcome winner for Michael Hourigan back in the City of the Tribes on Sunday, when Ballywilliam Boy, who he also bred, showed no ill effects from an illness that had slowed his progress earlier in the year, by galloping galloped all the way to the line after travelling well the whole way to garner the BetVictor Casino Novice Hurdle under Darragh O’Keeffe.

And down at Wexford the same day, Eoin McCarthy kept his winners’ column ticking along as Kicking Princess justified 9/4 favouritism in the Irish Stallion Farms EBF Mares’ INH Race, getting a tremendous ride from Gary Noonan, who scraped the paint throughout before making his challenge inside the final furlong and finding a willing partner to score by one and a quarter lengths.

The remarkable overseas exploits of Joseph O’Brien saw the Piltown trainer add another Australian prize to his collection as State Of Rest survived a stewards’ enquiry to claim the Cox Plate at Moonee Valley in the early hours of Saturday morning. O'Brien has saddled two Melbourne Cup winners in Rekindling (2017) and Twilight Payment (2020) and three-year-old State Of Rest became another notable international success as he fought out a dramatic finish in the 10-furlong Group 1. Partnered by John Allen, State Of Rest got the better of the Godolphin-owned Anamoe in the final furlong, winning by a short-head but was only declared the winner after a protracted stewards’ enquiry. Mark Power, representing O’Brien, told www.racing.com: “It’s not good for the heart - I’m absolutely trembling like a leaf. Johnny Allen was super, he’s strong as an ox. You couldn’t have a better man on your side. Luckily we had Johnny. It’s a relatively new process for me and luckily we came out on the right side of it.” For good measure there was further significant Irish success later the same day as Aidan O'Brien landed his tenth win in the Group 1 Vertem Futurity Trophy with Luxembourg at Doncaster. Rm got the 4/6 favourite home by a length and three-parts from Sissoko, the winner strengthening his position of winter favourite for the Epsom Derby.