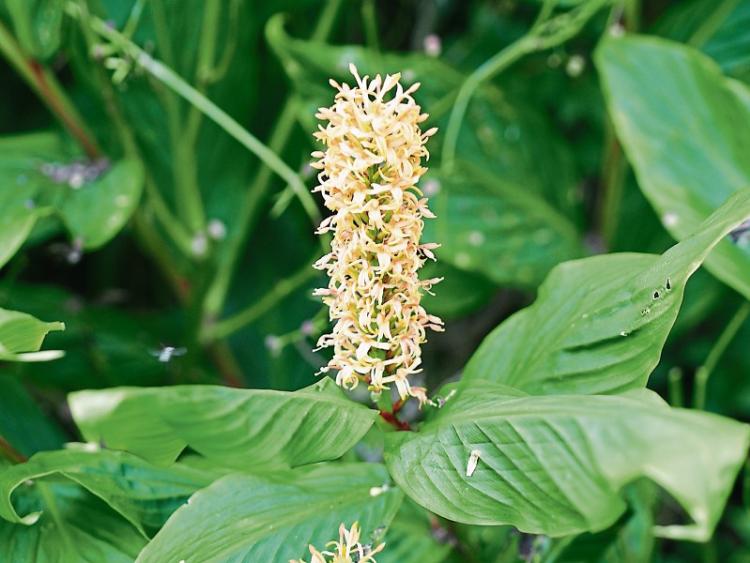 Hardy hibiscus can bring a touch of the tropics to the garden at this time of the year. It is one of the few late flowering shrubs that will flower in September if the summer has been good.

The hardy hibiscus is one of the last shrubs to come into leaf in spring. Don’t be fooled into thinking that the plant has died because it can survive a few degrees of frost. It does not produce leaves until early June. When they do emerge the leaves are usually pale green but they soon turn into healthy dark green leaves. It begins flowering in late August or early September. The flowers are produced on shoots of the current season growth so the plant has to make rapid growth over a period of three months. To produce this rapid growth the summer must be good with lots of sunshine, high temperatures and adequate rain. In a cold wet summer the plant may produce flower buds which will drop off before opening.

Hardy hibiscus has a long dormant period so they should be planted towards the back of a border, where shorter plants such as perennials and bulbs can divert attention away from their bare stems early in the year.

We grow hibiscus ‘Blue Bird’ which has lavender blue flowers. It was planted 12 years ago and is now 10 feet tall. Hibiscus ‘Woodbridge’ is a very good red variety. Hisbiscus syriacus ‘Oiseau Blue’ produces blue flowers from August to October, it grows about 5 feet tall.

Grow hardy hibiscus in a well drained fertile soil in a sunny sheltered position. Water if the weather is very dry to maximise growth during its short growing season.

Hibiscus do not need pruning but pruning is not difficult and it promotes the growth of large flowers. Prune in spring to produce new shoots with stunning flowers. The plant can be trained into a standard to make a magnificent focal point in sheltered gardens. If you fancy growing them in this way, a young plant needs to be reduced savagely to one stem and trained up a stout cane.

All subsequent side shoots should be removed until the plant reaches the desired height. Once a bushy head has become well established, pruning must be carried out each year in spring to keep the proportions balanced between the stem and the head.

Flowering bulb of the week

Hedychiums (Ginger Lily) are grown for their foliage and trumpet shaped, often fragrant flowers. These plants may be grown outdoors in mild areas, or they can be grown outside during the summer and brought into glasshouse before winter in cold gardens. When they are grown outdoors, choose a warm, sunny position that is protected from cold winds. Grow them in a humus rich, moist but well drained soil in sun or partial shade. In frost prone areas there are hedychiums that will survive in a warm position if given a deep winter mulch.

When they are grown indoors, pot them in equal parts of loom and leaf mould with a bit of sand added. Water indoor plants freely during the summer and gradually reduce towards winter, when the soil is kept dry. Plants grown under glass are prone to red spider mites so spray with Derris.

Hedychium densiflorum is a clump forming perennial with lance shaped glossy green leaves on reed like stems. In late summer slender stems shoot up bearing dense spikes of small, fragrant, yellow or orange flowers. The plant is a native of the Himalayas. Hedychium gardnerianum produces pale yellow flowers with red stamens. The flowers are produced from late summer to early autumn. The sweet scented flowers of the plants are short lived, but are produced in profusion. The plants may be divided in spring when growth begins.

Climber of the week

Berberidopsis corallina is a climber from Chile that flowers from summer to early autumn. It is an evergreen weakly twining plant with dark-green leaves. The plant produces dark-red spherical flowers in a cluster. It likes a humus-rich, neutral to acid soil in partial shade with shelter from cold winds. It needs no regular pruning but can be pruned in spring to fit into its available space.

On Tuesday September 12 the Limerick Flower and Garden Club will be hosting their first demonstration and flower arranging competition night after the summer break. It will be held at the Greenhills Hotel on the Ennis road. Geraldine McCarthy will be giving a demonstration on the night. Doors open at 8pm. New members are welcome.