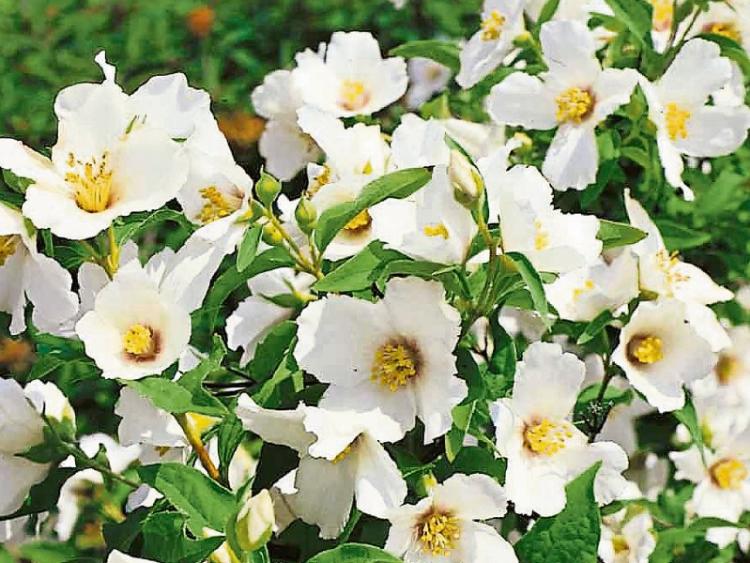 Cultivated for centuries: Philadelphus is not named after the American city but rather the ancient Greek king of Egypt, Ptolemy II of Philadelphus

Philadelphus is a shrub in full flower now. In July the branches of this hardy, deciduous shrub are weighed down with sprays of fragrant flowers that are white with a pale cerise blush at the base of each petal.

The shrub is easily grown in any type of well-drained soil in sun or partial shade. An occasional mulch of leaf-mould or rotted compost is beneficial. After flowering cut back the shoots that flowered; on established plants cut back about one-quarter of the old shoots to the base to promote new replacement growth. Philadelphus coronarius ‘Aureus’ has golden yellow leaves which needs shade from the sun to prevent the leaves burning. Philadelphus coronarius ‘Variegatus’ has leaves with broad white margins. Philadelphus species vary in size, most are medium-sized shrubs that grow about 10 feet tall. Philadelphus ‘Beauclerk’ is a slightly arching shrub that grows to 8 feet tall and produces white flowers with a slight pink-flush centre.

Herbaceous plant of the week

The outstanding feature of eryngiums is the unusual metallic-looking flowers they produce. Eryngium bourgatii grows 18 inches tall, produces blue branching stems with blue cone-shaped flowers with silver bracts. Most eryngiums are native to the dry, rocky coastal areas of Europe and North Africa where they produce large tap roots. Most eryngiums need sunny, free-draining soil, they are ideal for stoney or gravel beds. Plant between autumn and spring, cut flower stems down to ground level in late winter.

Bulb of the week

Triteleia is a bulb in flower now producing masses of purple-blue flowers. The plant is grown for its funnel shaped flowers which are produced on leafless stems; the leaves usually die away by flowering time.

The plant is suitable for a warm sunny bed or herbaceous bed, it will not survive severe frost. Plant the bulbs in the autumn, three inches deep, in a light sandy fertile soil in full sun.

Eremurus (Foxtail Lily) is a plant grown for its enormously tall flower clusters - its average height can be 4 to 8 feet tall, depending on the species. The flowers are produced in July. The tuberous roots have a very strange shape – thick, fleshy roots fan out in all directions from a central hub. Grow the tubers in fertile, sandy, well-drained soil in full sun. Mulch with a layer of compost in winter. The leaves of the plant wither back during the flowering period so plant the tubers among low-growing shrubs to cover the decaying foliage. The Ruiter and Shelford hybrids of eremurus produce flowers in shades of salmon, yellow and orange on flower stems up to four feet tall. Eremurus robustus has pink flower clusters up to three feet long on stems seven feet tall.

Peppers, chillies and aubergines are not the easiest or most economical of crops to grow but the fruits are beautiful when they ripen and the range of flavors are most rewarding. They are relatives of the tomato and need similar conditions so grow them in the greenhouse. The seeds are sown in spring and transplanted into nine inch pots or grower bags. Support each plant with a three foot cane and tie the plants onto the cane with a string. Apply a liquid fertiliser every two weeks after the first fruits appear. Green peppers are ready for picking in late summer or you can wait until they ripen to red. ‘Jumbo Sweet’is an F1 hybrid that produces giant peppers. ‘Inferno’ is a mediu hot chilli that produces a big crop over a long season. Watch for aphids, red spider mites and whitefly.

Prune wisteria by cutting back all the whippy growth made during the summer to within five or six buds of the main stems. This encourages the formation of flower buds for flowering next year. These shoots are shortened again in winter.

Some trees that are grafted, such as apple, pear and contorted hazel, produce suckers from the base. Remove these suckers down to ground level. The seeds of biennials such as wallflowers and sweet William can be sown now to produce flowers next year.